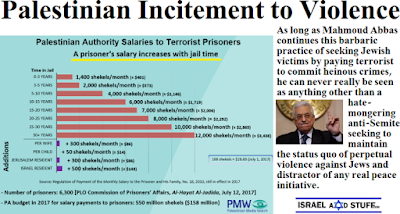 Israel’s decision to withhold US$138 million dollars in tax revenues collected for the Palestine Liberation Organisation (PLO) – equalling the estimated annual payments made to Palestinian Arabs (or their families) carrying out random and indiscriminate attacks against Israeli civilians – marks a watershed in Israel-PLO relations.

Israel’s action will see the PLO being finally jettisoned as a possible negotiating partner on President Trump’s long-delayed peace plan – deferred yet again until after the Israeli elections in April.

The release of the Trump plan could now be further postponed as the president continues his so far unsuccessful search to find other Arab negotiators willing to replace the PLO – which had already rejected having anything to do with Trump’s plan well before Israel’s latest decision.

The law authorising the freezing of these PLO funds was passed by the Israeli parliament in July 2018 – three months after similar legislation – the Taylor Force Act – passed by the US Congress – was signed into law by President Trump.

Israel’s Justice Minister Ayelet Shaked stressed the funds withheld would be used to pay “fat salaries to murderers who are in prison”.

They would also be used to pay Palestinian Arabs imprisoned in Israeli jails for lesser crimes.
Israel’s action follows the discovery of the body of 19-year-old Ori Ansbacher in the Jerusalem Forest on 7 February.

Channel 12 news reported that investigators from the Shin Bet security service and Israel Police hoped to indict Arafat Irfaiya, a 29-year-old Hebron resident, for murder in the context of a terrorist act in addition to a charge of rape.

Israel is clearly not prepared to allow this continuing wave of terror to be condoned and rewarded financially by the PLO.


“The Palestinians have accused the Israeli government of piracy, of coordinating this with the United States to add pressure ahead of the publication of the Trump peace plan”

The PLO had,however, been unceremoniously consigned to the diplomatic scrap heap by Trump well before Israel’s tax-revenue freeze. Trump had been given the thumbs down by the PLO after Trump had:

• Shut down the PLO offices in Washington

Chairman Mahmoud Abbas had already dismissed any further involvement with Trump on 5 January 2019:

Paying murderers and felons who kill and maim Jews has finally become the PLO’s political downfall.

Ori Ansbacher’s murder was the final tipping point for Israel to dump the PLO as a future negotiating partner after thousands of well documented random terror attacks on Israel’s civilian population over the last four years – perpetrated by individuals, many very young, inspired by vicious incitement in Palestinian social and traditional media and rewarded financially by the Palestinian leadership.

The days of “pay for slay”and fruitless negotiations with the PLO that have gone nowhere over the last 25 years are over.

Israel has well and truly closed the door on the PLO and it should remain locked and bolted.