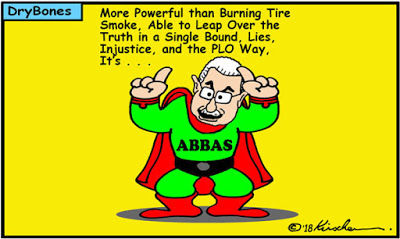 The historic opening of the American Embassy in Jerusalem has provided opportunities for Israel’s Prime Minister Benjamin Netanyahu to totally discredit the Palestine Liberation Organisation (PLO) and President Trump to review the PLO as a suitable Arab interlocutor to negotiate  with Israel on ending the Jewish-Arab conflict.

PLO Chairman Mahmoud Abbas didn’t take very long to reply with an outburst against America that seriously questions the fitness of the PLO to resume negotiations with Israel since the PLO walk-out in April 2014:

The rift between Trump and Abbas just continues to widen.

Not content with this salvo – Abbas claimed that the United States:


“has removed itself from the political work in the Middle East as a mediator. It’s no longer an arbiter”

President Trump would not take kindly to this latest rejection by the PLO of America’s decades-old role as sole mediator in any negotiations aimed at resolving a dispute that has gone on for 100 years.

For Israel – it was just the latest shot in a litany of lies that had its genesis in the 1964 Charter of the PLO – subsequently revised in 1968 – which still remain unamended despite false claims to the contrary.


“This Organisation does not exercise any regional sovereignty over the West Bank in the Hashemite Kingdom of Jordan, on the Gaza Strip or the Himmah Area. Its activities will be on the national popular level in the liberational, organisational, political and financial fields.”

Yet the 1968 Charter deleted this clause after Jordan and Egypt’s 19 years-occupation of these territories was ended in 1967.

The PLO had suddenly discovered an inalienable right to regional sovereignty in every square meter of these areas. Amazingly this claim has been swallowed hook line and sinker by the United Nations.
Such a recent claim is certainly novel and now must be weighed against Israel’s claim – whose roots in these territories were established 3000 years ago and can be visibly verified in 2018.

The biggest PLO lies are contained in Article 20 of the 1968 Charter:


“The Balfour Declaration, the Mandate for Palestine, and everything that has been based upon them, are deemed null and void. Claims of historical or religious ties of Jews with Palestine are incompatible with the facts of history and the true conception of what constitutes statehood. Judaism, being a religion, is not an independent nationality. Nor do Jews constitute a single nation with an identity of its own; they are citizens of the states to which they belong.”

These PLO lies should have been shredded decades ago. They have proved to be the greatest obstacle to peace between Israel and the PLO.

(Author’s note: The cartoon – commissioned exclusively for this article—is by Yaakov Kirschen aka “Dry Bones”- one of Israel’s foremost political and social commentators – whose cartoons have graced the columns of Israeli and international media publications for decades. His cartoons can be viewed here)