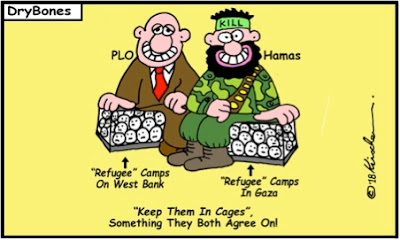 The British Foreign Office showed appalling judgement when scheduling a visit by Prince William to a refugee camp in the West Bank which should have been closed down long ago. The Prince  – obviously moved by what he saw – remarked:


“I saw at Jalazon (refugee camp) the tremendous hardships faced by the refugees, and I can only imagine the difficulties of life lived under these conditions, the ed (sic) resources and the lack of opportunity”


1. Jalazon had not been dismantled during the past 25 years after it came under Palestine Liberation Organisation (PLO) control.

2. Jalazon’s inhabitants should still be classified as “refugees” when they are living in part of former Palestine now under PLO occupation.

During their meeting Abbas stressed the UN’s important role in providing protection for
the “Palestinian people” and the necessity of continuing to provide services to the “Palestinian refugees” through the United Nations Relief and Works Agency (UNRWA).

Undiscussed between them was why the Palestine Liberation Organisation (PLO) in the West Bank and Hamas in Gaza have failed to close down the 27 refugee camps still remaining within their respective fiefdoms.

The West Bank currently has 775,000 registered “refugees” – around a quarter of who live in 19 refugee camps. Most of the others live in West Bank towns and villages. Some camps are located next to major towns and others are in rural areas.

UNRWA provides services in these 19 Palestine refugee camps – but does not administer or police the camps – as this is the responsibility of the PLO – intriguingly identified as the “host authority” by UNRWA Gaza has 1.3 million registered “refugees” – of who 500,000 currently live in 8 refugee camps. As in the West Bank – UNRWA does not administer or police these camps -this being the responsibility of the “host authority” – Hamas.

Many of these camps and their inhabitants date back to 1949. Severe overcrowding problems, high rates of unemployment, personal safety and poor infrastructure are common to them all.
Gaza’s entire population has been under Hamas occupation since 2007.

The PLO and Hamas have maintained their discriminatory two-tiered refugee segregation systems in Gaza and the West Bank for at least the last ten years under which:

Closing these refugee camps and integrating their long-suffering populations among the general population are long overdue. The failure of the PLO and Hamas to do so allows them to maintain and exploit a hard core of hate-filled and desperate Palestinian Arabs who can be readily incited and used as pawns and martyrs to undertake acts of terrorism against Israel.

UN and UNRWA complicity in refusing to pressure the PLO and Hamas to close these squalid camps and end an ever-worsening humanitarian crisis is reprehensible, immoral and completely inexcusable.

Entrenching apartheid by segregation and discrimination whilst denying equal rights to all members of the Arab populations in Gaza and the West Bank spells disaster for both Hamas and the PLO.

(Author’s note: The cartoon – commissioned exclusively for this article—is by Yaakov Kirschen aka “Dry Bones”– one of Israel’s foremost political and social commentators – whose cartoons have graced the columns of Israeli and international media publications for decades. His cartoons can be viewed at Drybonesblog)