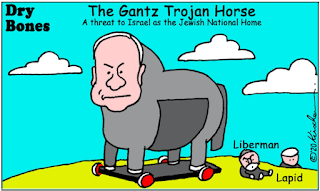 Prime Minister Benjamin Netanyahu has paid a high price for the National Unity Government being forged with Benny Gantz – by agreeing to Gantz becoming Israel’s Prime Minister in 18 months’ time without going to an election.

Netanyahu had run out of time to explore other options – having had that decision foisted on him by two extraordinary High Court of Justice cases ordering the Knesset Speaker – Yuli Edelstein – to convene the Knesset contrary to the Knesset’s own rules and procedures. Compliance by Edelstein would have unleashed a train of events that would have caused havoc and instability at a time when unity was sorely needed. Edelstein resigned.

It is indeed a miracle that Netanyahu and Gantz rescued Israel from this rapidly escalating political and constitutional crisis at the same time as Israel is coping with the ravages of Covid-19.

Gantz’s courage in dumping his partners in Blue and White – Yair Lapid and Moshe Ya’alon – when any hope of averting the crisis seemed lost and just as the doors of the Knesset were shortly to open – was praised by the Right but condemned by Lapid and Ya’alon in bitter and derogatory terms.

Gantz’s new found ally – Yisrael Beiteinu’s Avigdor Lieberman – was left high and dry – ruing his stupidity at having missed three opportunities in the last 12 months to be in Government with Netanyahu – making demands he absolutely refused to compromise on during negotiations with Netanyahu.

Lieberman was relegated to the Opposition benches with his six colleagues – a kingmaker no more.

Forgiven was the havoc caused when Gantz started to flirt with Joint List – the bloc comprising 15 members from the four Arab political parties – who endorsed Gantz to form the next Government – persuading Israeli President Reuven Rivlin to regrettably give Gantz first try to do so.

Gantz’s decision to embrace Joint List accorded with his first public statement after forming the Resilience Party in December 2018. Druze demonstrators protesting the 2016 Nation-State Law defining Israel as the nation-state of the Jewish people and ending Arabic as an official language of Israel – were told by Gantz:


“We have a blood alliance, but just as importantly, we have a life alliance. We need to make sure that we build this partnership and this alliance together, as it should be. I will do all in my power to work to amend the legislation, so it will give expression to this bond, the deep bond that cannot be severed—not just in battle, but also in life; not just in difficulties, but also in good times. We’ll do this together.”

Gantz is perfectly entitled to propound the idea that Israel should become the state of all its citizens – no longer the Jewish National Home reconstituted by the League of Nations 1922 Mandate for Palestine and article 80 of the United Nations Charter.

But to do so as Prime Minister – without receiving any electoral mandate to pursue that highly-controversial policy – is another thing.

The Gantz Trojan Horse is knocking at the Prime Minister’s door – and Netanyahu has let him in.

Author’s note: The cartoon—commissioned exclusively for this article—is by Yaakov Kirschen aka “Dry Bones”—one of Israel’s foremost political and social commentators—whose cartoons have graced the columns of Israeli and international media publications for decades. His cartoons can be viewed at Drybonesblog