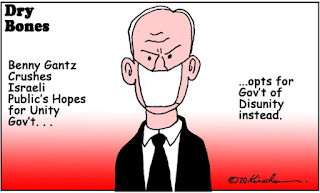 Benny Gantz’s decision to do a deal with the Joint List to influence President Rivlin into giving Gantz first bite at forming Israel’s next Government is reprehensible, unconscionable and against Israel’s national interest.

Gantz’ decision allows the Joint List with just 15 of the 120 seats in the Knesset and 12.67% of the vote at the recent elections to sow discord and create confusion over the next six weeks as they plot with Gantz to overthrow Netanyahu – Israel’s longest serving Prime Minister.

“Owners of this land”?

Gantz’s new partner was making it crystal clear to Israel’s President that Israel was not recognized by Tibi’s party as the Jewish National Home reconstituted after 3000 years by and with the unanimous resolution of all 51 member states that comprised the League of Nations and endorsed the Mandate for Palestine.

Balad – the second party included in the Joint List and now in partnership with Gantz – had former MK Said Nafaamong its ranks.Nafa was convicted of maintaining contact with a foreign intelligence
operative and spent time in prison.

Another former Balad Knesset member, Basel Ghattas, was convicted of smuggling cell phones to Palestinian prisoners in an Israeli jail, an offence for which he too was convicted and imprisoned.

Spokesperson for the Joint list is Ayman Odeh – the head of Hadash, the third party in Joint List.


“Right now, with Gantz’s attitude [in favor] of a Jewish majority and unilateral annexation, we have no one to recommend to the president. If there is a change after the elections in the direction of peace and equality, we will weigh our position again.”

A Netanyahu-Gantz-Liberman Government of National Unity comprising 105 Knesset members was indicated by the election results – Netanyahu’s Likud party having secured 238,882 extra votes and 4 extra seats whilst Gantz’s Blue and White Party only secured 69,167 extra votes and no extra seats.

Instead, Gantz and his Blue and White colleagues Moshe Ya’alon and Yair Lapid – together with Yisrael Beitenu leader Avigdor Liberman – have jumped into bed with the Joint List to realize their common objective: all hate Netanyahu for a variety of personal reasons and want to see his political career ended.

Odeh had called for Gantz to form aminority Government with support of the Joint List in October 2019 – saying that even if it would quickly fall, such a “courageous” move would be worth it for thesingle purpose of ousting Benjamin Netanyahu as prime minister.

Gantz has now taken the bait – to his eternal shame, Israel now faces six weeks of political chaos and confusion as Gantz and his 45 Netanyahu-hating coalition partners cosy up to and embrace15 Joint List Knesset members who revile them, Netanyahu and the Jewish State.

Author’s note: The cartoon – commissioned exclusively for this article—is by Yaakov Kirschen aka “Dry Bones”  – one of Israel’s foremost political and social commentators –whose cartoons have graced the columns of Israeli and international media publications for decades. His cartoons can be viewed at Drybonesblog