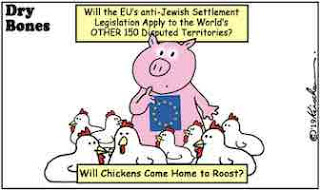 France has set in train a diplomatic and politically-motivated semantic assault on Israel that could ultimately see the European Union biting off more than it can chew.

A press release noted that the Court of Justice of the European Union in Luxembourg on 12 November had found in favour of France’s determined effort to protect unwitting French consumers being possibly misled when they buy cheese, wine or other produce sold by Jews originating in Judea and Samaria:


“… the Grand Chamber of the Court ruled that foodstuffs originating in territories occupied by  the  State  of  Israel  must  bear  the  indication  of  their  territory  of  origin,  accompanied, where those foodstuffs come from a locality or a group of localities  constituting an Israeli settlement within that territory, by the indication of that provenance.”

This decision lays down stringent labelling requirements for Jewish producers in Judea and Samaria to ensure their products were kosher enough to be sold into the European Union.

The sham that this would prevent consumers from believing such products were “Made in Israel” took on a far more  sinister political resonance asthe press release continued:


“as regards the issue whether the indication ‘Israeli settlement’ is mandatory, the Court first of all underlined that the settlements established in some of the territories occupied by the State of Israel are characterised by the fact that they give concrete expression to a policy of population transfer conducted by that State outside its territory, in violation of the rules of general international humanitarian law. The Court then held that the omission of that indication, with the result that only the territory of origin is indicated, might mislead consumers. Consumers have no way of knowing, in the absence of any information capable of enlightening them in that respect, that a foodstuff comes from a locality or a set of localities constituting a settlement established in one of those territories in breach of the rules of international humanitarian law. The Court noted that,under Regulation No 1169/2011 ,the provision of information to consumers must enable them to make informed choices, with regard not only to health, economic, environmental and social considerations, but also to ethical considerations and considerations relating to the observance of international law. The Court underlined in that respect that such considerations could influence consumers’ purchasing decisions”.

All this pompous gobbledy gook being required for labelling the source of products made in territory disputed between Jews and Arabs for the last 100 years is deeply disturbing. There is no appeal from this decision.

The European Union could be in a real political bind as a result. The labelling requirements introduced by the European Union in 2011 and interpreted in 2015 has led it down this disastrous path promising only ridicule and contempt.

To be consistent and not be subjected to charges that it is deliberately targeting Jews and inciting Jew-hatred – the European Union needs to insist on similar stringent labelling requirements being immediately applied on goods originating from more than 150 disputed territories around the world.

Alternatively – the European Union could get itself out of this embarrassing labelling war and PR disaster by simply requiring goods originating from Israeli settlements to state “Product of Judea” or“Product of Samaria”.

Judea and Samaria – the historic and geographic terms used for the disputed territories for the last 3000 years – were relabelled the “The West Bank” by Jordan in 1950 – and enthusiastically embraced by the European Union.

The chickens from Judea and Samaria have come home to roost. Truth in labelling by the feckless European Union is long overdue.

Author’s note:The cartoon — commissioned exclusively for this article — is by Yaakov Kirschen aka “Dry Bones”  — one of Israel’s foremost political and social commentators —whose cartoons have graced the columns of Israeli and international media publications for decades. His cartoons can be viewed at Drybonesblog