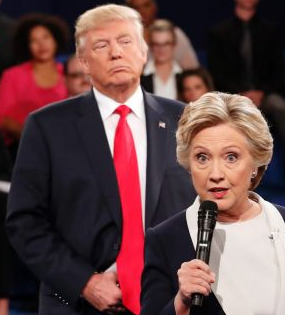 My previous post, which begins with mention of Jenny Tonge, involves an observation of mine on the execrable antisemitism David Collier discovered over the weekend when he attended visit to the anti-Israel/anti-Jewish Hatefest at Lichfeld Cathedral, a post that does that intrepid photo-blogger great credit.

This post is by another David, Sydney lawyer and international affairs analyst David Singer, who of course needs no introduction to regular readers of my blog.

Hillary Clinton has made it very clear in the second Presidential Debate that if elected next President of the United States she will continue President Obama’s confrontation with Russia both in Syria and at the United Nations.


“Well, the situation in Syria is catastrophic. And every day that goes by, we see the results of the regime by Assad in partnership with the Iranians on the ground, the Russians in the air, bombarding places, in particular Aleppo, where there are hundreds of thousands of people, probably about 250,000 still left. And there is a determined effort by the Russian air force to destroy Aleppo in order to eliminate the last of the Syrian rebels who are really holding out against the Assad regime.

Russia hasn’t paid any attention to ISIS. They’re interested in keeping Assad in power. So I, when I was secretary of state, advocated and I advocate today a no-fly zone and safe zones. We need some leverage with the Russians, because they are not going to come to the negotiating table for a diplomatic resolution, unless there is some leverage over them. And we have to work more closely with our partners and allies on the ground.

But I want to emphasize that what is at stake here is the ambitions and the aggressiveness of Russia. Russia has decided that it’s all in, in Syria. And they’ve also decided who they want to see become president of the United States, too, and it’s not me.”

Clinton’s no-fly zone over Libya proved disastrous and has already been rejected by Russia over Syria.

She left unexplained what leverage she could put on Putin to get him to the negotiating table.

Her assessment that Russia wanted Trump elected as President of the United States was probably correct for the following reasons enunciated by Trump during the debate.

… I think you have to knock out ISIS. Right now, Syria is fighting ISIS. We have people that want to fight both at the same time. But Syria is no longer Syria. Syria is Russia and it’s Iran, who she [Clinton] made strong and Kerry and Obama made into a very powerful nation and a very rich nation, very, very quickly, very, very quickly.

I believe we have to get ISIS. We have to worry about ISIS before we can get too much more involved. She had a chance to do something with Syria. They had a chance. And that was the line. And she didn’t.”

The choice for America’s voters could not be clearer:

* continuing confrontation with Russia seeking to resolve the Syrian civil conflict which has raged since 2011.


“The Security Council needs to give preferential attention to the task of creating a solid legal foundation for the fight against this evil [Islamic State] and for the mobilization of an actual global coalition in response to this common uncompromising challenge for us all.”

American voters have been presented with a stark choice between Clinton and Trump on America’s future involvement in Syria.