No, not this lady, our old buddy the Baroness.  Here’s one of her latest rants on social media, where she seems increasingly niggled by the fact that some dastardly Zionists are taking issue with her jaundiced views: 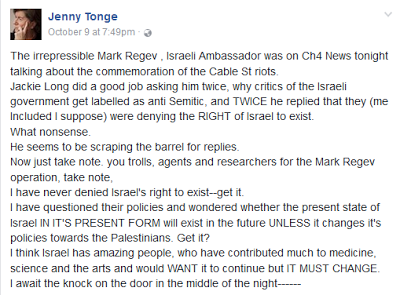 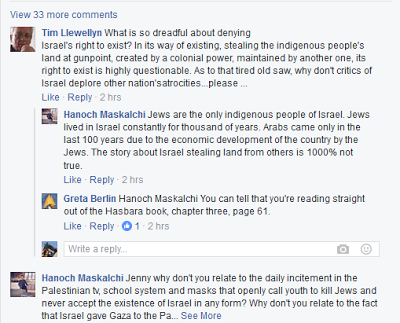 My header refers to a lady of very different views.

For if there is one thing more than another which strikes me as symbolic of the despicable attitude of this past Hatefest at Lichfield Cathedral as described in David Collier’s absolutely stunning account of an event replete with  “antisemitism, conspiracy theories, global control, blood sucking Jews, child kidnappers, … and of course, Jesus the Palestinian….,” it was the attempt to silence a lady by the name of Mandy Blumenthal.

As described by David, this outrageous incident occurred immediately following the Israel-demonising talk by the University of Birmingham’s Professor Kamel Hawwash, Vice-Chair of the Palestine Solidarity Campaign:


‘Talk over, question time again. Several hands go up. One of the first questions is to ask how Israel gets away with it, what “unseen” power is there? This same question was asked in a different way on four separate occasions during the day. One mentions a conspiracy directly, another the conspiratorial secrets of a Le Carre novel, another talks of unseen power. But all carry the same underlying message….

At this point sitting next to me with her hand raised is Mandy Blumenthal. Zionist to the core, Mandy had asked a question of Yossi Meckleberg earlier in the day.  She had wanted to know why Yossi had seemed to imply settlements, rather than Arab rejectionism and violence was a (the?) major stumbling block. This time, with the knowledge that Mandy was a Zionist, the Chair was visibly ignoring Mandy’s raised hand. shhhh-1The Chair was desperately seeking questions from elsewhere in the audience. The questions had dried up. It was a stand-off. Mandy became vocal:

“Because you spoke earlier” came the reply.

As an answer it did not suffice. Several people had asked more than one question.

The situation was absurd. There were no more questions. Only Mandy’s hand remained aloft. There were still 10 minutes left till the end of this session.Several people became visibly agitated. A member of the audience asked why the chair was ignoring Mandy’s question.

Mandy spoke up again:”Isn’t this a conference? Why is only one side allowed to be heard?”

Open confrontation. This was not what the Dean had wanted, he stepped in to soothe the situation and offered Mandy Blumenthal the microphone.

Yet as he did this and as Mandy stepped up, the Chair led Kamel Hawwash off the stage. The ‘Jew’ question need not be answered. An awful, vile slur. In the end, Hawwash did return but only to claim that Blumenthal had lied.

It was break time again. There were several cries of “shame on you”, but I am not sure to who[m] it was directed.  Someone came straight up to Mandy to apologise. “This is my town and I am Christian but that was unacceptable.” …. Others started to get involved, some suggested they had not expected this conference to be so one sided….’

Meanwhile, he and Ms Blumenthal are among those ably challenging the church for its antisemitism on this Facebook post below: