Unsurprisingly, the defection of principled men and women from the cesspool that is the Corbyn-led Labour Party continues.

Three years ago, during the furore surrounding despicable comments regarding Hitler and Zionism made by former London mayor Ken Livingstone, who quit the Labour Party in 2018,  Labour MP Ian Austin, whose Jewish adoptive father arrived in England from Czechoslovakia as a ten-year-old in 1939, made (top left) what many Twitter users consider his finest tweet.

A few days ago, disgusted by the antisemitism that lurks in Labour’s ranks, resigned from the party, telling the BBC’s Kirsty Wark in an interview that if he remained he would no longer be able to look his father (whose immediate family was murdered in Treblinka) and his Jewish friends in the eye. 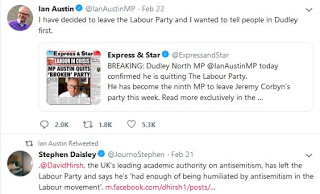 “I was one of the first to raise concerns about antisemitism following events at the 2017 Conference in Brighton”, wrote a Brighton and Hove Councillor Warren Morgan a couple of days ago, explaining his resignation from the Labour Party, which he joined in 1993.


“It was my duty as council leader, as a Labour councillor, to call out racism wherever and whenever it appeared, without fear or favour, in defence of the city’s Jewish community. For that I was vilified by members locally and supporters of Jeremy Corbyn nationally.

Friends in the Jewish Labour Movement urged me not to resign my membership, as others have done, in response to the unchecked and rampant antisemitism amongst Party members, in order to fight back and clear the Party of those with racist antisemitic views. I have done so until now. The resignation of Luciana Berger from the Party is a clear sign that members of the Jewish community and those who support them have no place in Labour.” 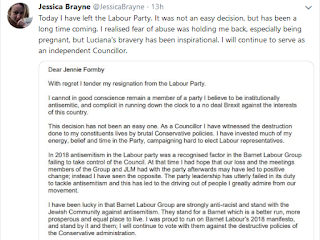 Investigative journalist Tom Bower’s searing exposé of Jeremy Corbyn’s problem with da Joos published last week in the Jewish Chronicle must be actingas a final straw for some Labour members, and it is only to be regretted that the revelations it contains, uncovered during Mr Bower’s researches for his just-published biography of Corbyn, Dangerous Hero,were not known and publicised before Corbyn was elected party leader.

Here, by the way, is anti-Israel hard leftist John McDonnell’s insolent tweet regarding the biography. 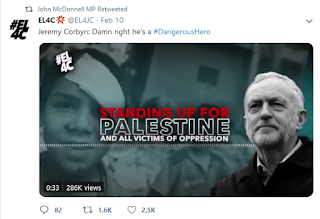 McDonnell, a handpicked member of Corbyn’s team and Shadow Chancellor, no less, showed his vile hostility Jews and Israel again last week when he called for Britons who fought in the IDF to be deprived of their British citizenship.


‘I am among the few living people who interviewed for TV serious Nazi war criminals….

Like those antisemitic Nazis, Mr Corbyn blames the malign power of Jews for orchestrating a global conspiracy to oppress the workers. “The power of the Israel lobby is truly phenomenal,” Mr Corbyn said in 2003 to Hamas supporters, referring to his conviction that rich Jewish bankers, especially in New York, are orchestrating Zionist influence.

Ever since Mr Corbyn was elected Labour’s leader in 2015, he has faced accusations about his antisemitism, which he has denied. However, while researching the book I came across an interview he gave in September 2015 which confirms Mr Corbyn’s antisemitism.

Unsuspecting, Mr Corbyn had settled down in front of a microphone to help a local historian compile eyewitness accounts for The Holloway Project. Mr Corbyn was asked to describe his attachment to the Holloway Road, an ugly highway running through Islington, his north London constituency. But before identifying his favourite places along that dust bowl, he described his early life and, most noteworthy, his first job in London in 1973 as an assistant researcher at the National Union of Tailor and Garment Workers.

In Mr Corbyn’s version, as the most junior employee he personally challenged the Jewish employers of his members — “scumbags” and “crooks”, as he would describe the tailors — to recover the members’ unpaid wages. Their bosses, explained Mr Corbyn, “had mysteriously gone bankrupt just before Christmas, owing their workers a lot of wages and not paying National Insurance and all this kind of thing. Scumbags actually. Crooks. My job was to try and chase these people through Companies House and so on.”

Mr Corbyn’s account is contradicted by Alec Smith, the union’s former leader and Mr Corbyn’s direct superior, now in his eighties, who I tracked down in Essex, and by the trade union’s well-catalogued records.

Pertinently, the union’s archives stored at universities in London and Manchester do not reveal any issues about “unscrupulous employers” and do not show that any member complained about being unpaid, especially before Christmas.

Mr Smith told me with certainty that Mr Corbyn “never had any contact with our members. He just sat in at meetings passing me information”. Mr Smith recalled: “The clothing industry is a tough business. If an employer went broke it was because of trading conditions — not to fiddle their employees.”

Not for the first time, Mr Corbyn had reshaped the truth to improve his self-image. He conjured the tale of a brave personal fight against exploitative Jewish employers of sweatshop labour and exposed his disdain towards those Jews seeking self-improvement to fulfil the dream of moving from the East End slums to North London’s suburbs.’

Bower, whose first wife is a source for some of his discoveries, goes on to state:


‘Uneducated and uninterested in culture and anything spiritual, Mr Corbyn, as a committed communist, was unsympathetic towards a race complicated by its history of survival over 2,000 years of persecution….

[He} defined Zionism as racism and accused white Jews of acting as supremacists, oppressing coloured Arabs in what he called “Israel’s apartheid occupation” of Palestine. He condemned the Balfour Declaration… and dismissed the effect of the Holocaust to explain the Jewish people’s longing for a return to their own country after 1945 to avoid future persecution.

[He] preferred to ignore that Israel was created by the United Nations and fulfilled all the legal requirements for international recognition. Pertinently, he never complained about the simultaneous creation of Pakistan in 1948, where partition of the sub-continent had caused millions of deaths and led to the persecution of Hindus by the new Muslim state.

In Mr Corbyn’s hierarchy of oppression, the descendants of slaves were the most victimised, while Holocaust survivors were at the bottom of the list. He did not distinguish between Jews in London and Zionists in Tel Aviv. To him, they were all guilty.

Mr Corbyn’s antisemitism simmered unseen, even after he was elected as an MP in 1983, until the Islamist attack on New York on September 11 2001. In the aftermath, he organised with fellow communists the Stop the War Coalition (SWC), ostensibly to protest against the American invasion of Afghanistan and Iraq.

Mr Corbyn’s partner in SWC was the Muslim Association of Great Britain. This group was attached to the Muslim Brotherhood. Some on the left questioned the coalition of Marxists with political Islamists but Mr Corbyn successfully argued that the alliance was forged by a mutual opposition to Zionism.

Thereafter, during protest marches through London, banners against the war would be given equal billing to the Muslim Association’s placards urging the destruction of Israel. The two, said the Muslim organisers, were linked: Zionists were planning the imminent invasion of Iraq. Mr Corbyn agreed.

Thereafter, Mr Corbyn frequently associated with Muslim extremists who advocated in antisemitic language Israel’s destruction. Speaking on the same platforms with the extremists, he appeared to share his hosts’ refusal to distinguish between anti-Zionism and antisemitism…’

Be sure to read the entire article dissecting Danger Man’s antisemitism.  It pulls no punches.

The fact that in his biography of Corbyn Bower by an unfortunate slip refers to “Cat Stephens” when he means “Cat Smith” the female Labour MP, does not validate the disdainful dismissive review of the book undertaken by reviewer Stephen Bush (political editor of the New Statesman) in the Guardian, where the issue of antisemitism is not mentioned by Mr Bush.

More (out of numerous other) examples of Corbynista slime:

As others have asked, recalling this, has Williamson no mirror? 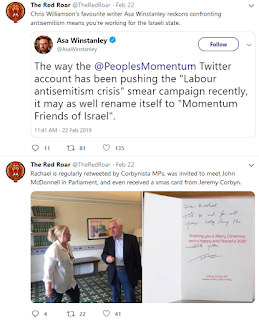 There seems to be a great deal of “rich man antisemitism” at the base of Corbynista Jew-hatred, the perception of Jews as plutocrats, the manifestly unfounded belief that all Jews are wealthy.  Still, Corbyn continues to have his as-a-Jew toadies,  They surface every so aften in the correspondence colums of the Guardian … as well as of the Islington Tribune.