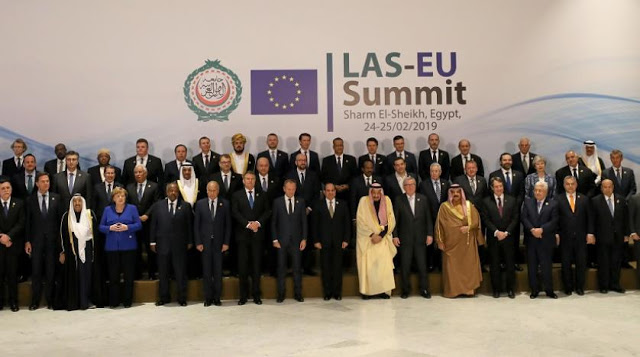 If you believe the Palestinian media, the summit looks like it could have taken place during the Oslo process, and the Palestinian issue is dominating the discussion as the issue that must be resolved before anything else.

European media indicates something quite different, with the Palestinian issue all but ignored.

Palestinian Ma’an says that the Palestinian cause is the central issue, and gives examples from speeches.

Host Egyptian President Abdel Fattah al-Sisi said at the opening, “Common challenges have been reflected in the hotbeds of conflict in the region, foremost of which is the Palestinian issue, which is the main Arab cause and one of the main roots of these conflicts, as it continues to deprive the Palestinian people of their legitimate rights, and even the continued destruction of Palestinian human rights, which the international community overlooks.”

King Salman Bin Abdul Aziz of Saudi Arabia said that the Palestinian issue is the primary issue of the Arab states. “At the recent summit of the Arab states held in Jeddah called the Jerusalem Summit, we reiterated our firm stand towards restoring all the legitimate rights of the Palestinian people, including an independent state on the 1967 borders with East Jerusalem as its capital in accordance with the Arab peace initiative and international legitimacy. “

He echoed the subtle threat that used to be standard in all discussions with Arabs, saying that the solution of the Palestinian issue is important for peace and stability not only in the region but also for world peace and for Europe in particular, praising the European efforts to find a lasting and just solution to this issue. The implication being that terrorists will blow stuff up unless Europe gives the Palestinians whatever they want.

Mahmoud Abbas’ speech today is expected to echo the same theme, according to Saeb Erekat, that the key to regional and world peace is giving in to Palestinian demands.

Arab League Secretary General Ahmed Aboul Gheit also mentioned the Palestinians, saying that the Palestinian issue is a political issue and will not be solved by economic measures. The settlement of the Palestinian issue in a fair and sustainable manner is the most effective way to stabilize the region, he said.
Coverage of the summit by the European media tells a different story, though.
Germany’s DW has an article on Day 1 of the summit, and the word “Palestinian” is missing.
The EU statement on the summit likewise ignores what had been up until recently widely considered the key issue to be resolved in the Middle East. Instead, it says:

Leaders from both sides will seek to strengthen Arab-European ties. They will also address a wide range of issues and common challenges, such as:

multilateralism
trade and investment
migration
security
the situation in the region

The summit will also provide an opportunity for leaders to discuss the latest developments in the region, such as the Middle East Peace Process and the situation in Yemen, in Libya and in Syria.

The absence of the word “Palestine” in that last paragraph says volumes.

Significantly, after the opening statements, the rest of the Day 1 activities were closed sessions, so it appears to be understood that the Arab leaders would trot out the pretense that they care about the Palestinian issue and then get to work on the real problems of the region.