Very recently, in London, a protest against the odious British Labour Party leader: 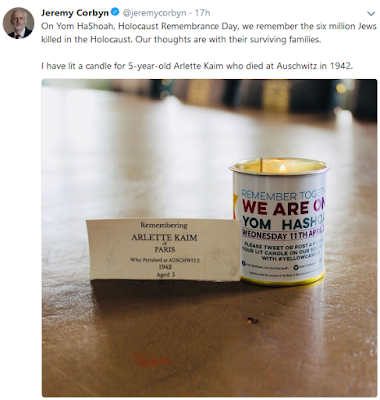 Many people are outraged by this tweet, regarding it as cynical exploitation of the Holocaust on Corbyn’s part.  To quote just one outraged observer, posting about it on Facebook from Tel Aviv:

“Don’t you dare Jeremy Corbyn, don’t you dare insult the 6 million Jews murdered, when you cannot remove the stench of Antisemitism from your very core, when you embrace Holocaust deniers & when you count as ‘friends’ Hamas & Hezbollah, who seek genocide against the State of Israel! “