Some everyday hypocrisy from Jordan:

In a statement carried by Jordan’s official Petra news agency, government spokesman Mohamed al-Momani condemned “provocative and irresponsible” acts by Israel, which, he said, “violate the sanctity of this holy place and provoke the feelings of Muslims”.

“Such acts violate Israel’s obligations under international law as the occupying power in East Jerusalem,” he said.

“International conventions call for respect to be paid to the places of worship of all religions,” al-Momani added.

He urged Israel to immediately halt such provocations and show respect for Al-Aqsa’s historical and religious importance, with reference to Jordan’s supervisory role over East Jerusalem’s Muslim and Christian holy sites.

We are so used to seeing these sorts of statements that we too often forget how outrageous and sickening they are.

Today, Jews show far more respect for the Temple Mount than Muslims do. To Jews, it is their holiest site to be treated with the utmost respect. To Muslims, it is also a park where kids play soccer and volleyball, summer camps are run also s spot from which hate for Jews is broadcast.

But the hypocrisy goes far beyond that. 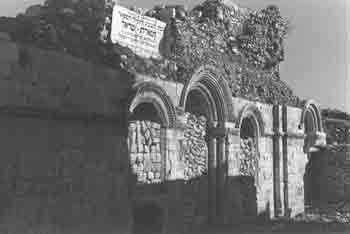 Here is the depth of Jordan’s supposed respect for religious sites, from JTA, November 2, 1967:


A shocking record of destruction and desecration of Jewish holy places in and around Old Jerusalem during 19 years of Jordanian rule was documented today in the report of an inter-ministerial committee that was appointed after the Six-Day War to determine the state of Jewish shrines in Jordan held territory.
The findings of the committee were summarized by Zerach Warhaftig, Minister of Religious Affairs, at a press conference here. As examples of the wanton disregard of the religious rights of others, Mr. Warhaftig noted the destruction of all but two of the 58 synagogues in the Jewish quarter of the Old City and the almost total destruction of the Jewish cemetery on the Mount of Olives which has been in continuous use for more than 2,000 years.
The cemetery was one of the Jewish holy places to which access was promised by the Jordanians in the 1949 armistice agreements although the promise was never observed. Tombstones were carried away for purposes ranging from fortifying mortar positions to building lavatories and the report says, documentary evidence and eye witnesses “make it clear beyond doubt that the desecration of the cemetery was carried out by Jordanian authorities for official purposes.” 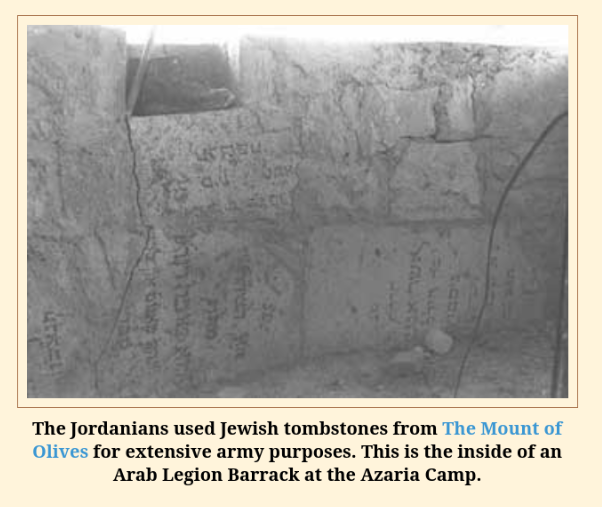 The Jordanian Government, according to the report, had placed a special guard at the cemetery, but only to prevent tombstones from being pilfered by private persons. Their use was authorized for building military camps, fortifications, pathways and other installations and the walls of the building that housed the army commanders. Part of the road to the Intercontinental Hotel was paved with tombstones, the report said. And the Jordanians never bothered to remove the remains of the dead.

Israel needs to respond to each and every such statement from Jordan with a demand for an apology and financial compensation for the damage done to synagogues and graves over 19 years of when Jerusalem was Judenrein. It is way past time that Israel remains silent when absurd allegations of desecration are hurled at Jews who politely and respectfully walk on their holiest spot – a place where the entire idea of Islamic sanctity is derived from the Jewish veneration for that area.

Only when every dollar is repaid and a heartfelt apology given will Israel be willing to engage in a discussion of respect for holy places – a discussion where Jordan will still come out poorly, today.