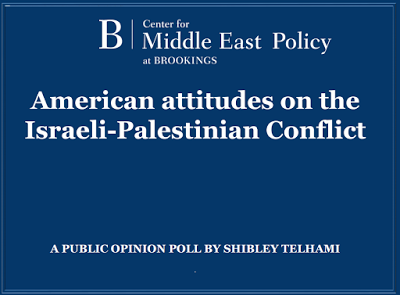 
The number of Americans who support imposing sanctions on Israel over its defiant settlement policies has shot up to 46 percent, the same percentage of Americans who voted for Donald Trump in the presidential election.

That number has shot up nearly 10 percentage points over the past year, according to a national poll published by the Brookings Institute on Friday, on the sidelines of this week’s Saban Forum, “an annual dialogue between American and Israeli leaders.”

Among Democrats, a 60-percent majority “supported imposing some economic sanctions or taking more serious action” in response to Israeli settlements, the poll found. A much smaller number of Republican respondents (31 percent) support sanctions.

Now, look at how the question was worded:

One of the issues of tension between the United States and Israel has been its construction of Israeli settlements in the territories occupied by Israel in the 1967 war. These settlements are considered illegal by most of the international community and have been opposed by every U.S. administration, both Republican and Democratic. The Israeli government has continued to build settlements arguing that they have the right to do so, or that these are not obstacles to peace.
How do you believe the U.S. should react to new settlements?

The question starts off by priming the target with “Settlements are a source of tension between the US and the Israelis,” “Settlements are illegal,” and ” The US has consistently opposed them.” The Israeli viewpoint is presented as “Israelis have no good or valid arguments to support settlements but they build them anyway.”

It is no surprise that the poll was created by Shibley Telhami, the  Anwar Sadat Professor for Peace and Development at the University of Maryland, and author of “The World Through Arab Eyes.”

Pollsters should always check their questions for unintentional bias. It is hard to believe that the bias in this question was not intentional.

What if the question was worded:


The Jewish people have lived in Judea and Samaria for thousands of years, and it is the central part of their history. The international community supports a Palestinian state in those areas where the Jews who live in their ancestral homeland would not be allowed to stay in their homes. Should the US support the right of Jews to continue to live  in the land of their ancestors, or not?

How would people answer that question?

The poll had other leading questions. For example:

How about adding “Israel and the US have supported a Palestinian state but have insisted that it only come about from negotiations, not from  unilateral action by the UN, which has been consistently historically biased against Israel”?

The question also doesn’t describe the differences if the US votes no or abstains, which most respondents wouldn’t necessarily know.

The rest of the poll has similar issues.

A hilarious but very accurate description of how pollsters can lead a respondent to the answers they want comes from the British comedy Yes Prime Minister: