One wonders at the wisdom of a London rabbi visiting a town in Lebanon, now mostly controlled by Iran’s proxy Hezbollah and ethnically cleansed of all Jews, to discuss ‘interfaith relations’. Rabbi Goldberg’s visit, here reported in the Jewish Chronicle,  took place under the auspices of the Lokahi Foundation, which takes its name from the Hawaiian word for ‘harmony’. (With thanks: Andrew)

It is not every day the Grand Mufti of Tripoli, Lebanon – where security forces have clashed with Islamist militants in recent years – meets with a rabbi from London.

It is not every day he admits to doing so on social media. 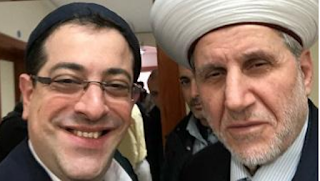 But, after meeting Rabbi Alex Goldberg – the first rabbi to travel to the city since the 1970s – Mufti Sheikh Malek Shaar went on Facebook to speak positively about his meeting with “Muslims, Christians, Sikhs, Jews and Baha’is”.
As well as the risk Rabbi Goldberg faced in travelling to a city the Foreign Office warns against visiting, there is also a risk for Muslim leaders to admit publicly to meeting someone Jewish.

The visit, which took place earlier this month, was an opportunity for Rabbi Goldberg, a Surrey University Chaplain and chief executive of the Carob Tree Project, to find out more about how Catholic, Orthodox, Druze, Sunni and Alawite leaders are working together in the city.