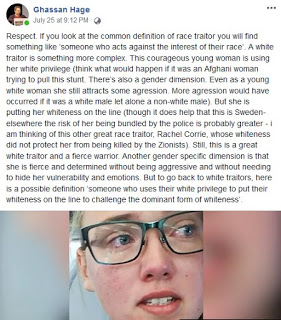 At top left, an anti-Israel Aussie academic’s take on Gothenburg University student Elin Ersson’s much-publicised action in holding up a passenger plane to prevent the deportation from Sweden of a failed asylum seeker back to Afghanistan.

I’ll sweep aside for now the noisome reality of increasingly islamicised Sweden and what it portends for people with two X chromosomes such as such as Ms Ersson herself, but the Danish woman in this video nicely indicates the problem facing Swedes in general and the female of the species in particular.

After all, there’s nothing privileged about being the white victim of an “Asian” Muslim rape gang.

And we see the double standard it engenders in barrister Dafydd Enoch QC’s defence of a Muslim father living in the UK city of Leeds, who with his wife tricked his teenage daughter (UK-born, westernised and hoping to study at university) into travelling to rural Bangladesh, where she was married off against her will:


“These events are not borne [sic; BBC spelling] out of malice, hate, greed or prejudice. They were borne [sic] of deep-seated culture.”

(Reminiscent of a “progressive” young male schoolteacher who indignantly told my then schoolboy son, when the lad compared the oppression of women in most Middle Eastern countries to the Apartheid in South Africa that the teacher was talking about, that the Arabs’ attitude to women is “part of their culture” and dismissed the misogyny as of no importance.)

All praise, therefore, to Jacinta Price, a councillor in the famous Outback town Alice Springs and an aspiring parliamentarian, who on last night’s The Bolt Report on Sky TV, denounced the current leftist trend to blame the very high level of violence against women in aboriginal communities to the enduring impact of white colonialism on aboriginal males.

Ms Price, of joint aboriginal and Celtic heritage, did not resile from laying a large part of the blame for that violence on the misogynistic elements inherent within traditional aboriginal culture.  That’s heresy in leftist eyes, but as Ms Price pointed out, to deny the aboriginal people responsibility for their own actions and portray them only in terms of white victimhood is to infantilise and insult them.

Nor she been slow to call out the ABC (Australia’s answer to the BBC) for its approach to the question of Islamic misogyny, as in this social media post involving ABC darling Yassmin-Abdel-Magied, who on the ABC’s QandA program described Islam as a feminist religion.  What a breath of fresh air Ms Price brings to the public arena: long and strong may she flourish! 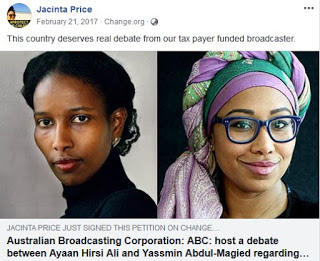