TOP NEWS
http://jewishrefugees.blogspot.com/2017/10/boris-johnson-ignores-jewish-rights-in.html
When we stated that the Jewish refugee message was getting through in the UK, we spoke too soon. The British foreign secretary, Boris Johnson, sadly displayed complete ignorance of the abuse of Jewish rights in the Arab world and the Jewish refugee issue in a recent op-ed. He called only for a ‘fair, agreed  and realistic solution to the Palestinian refugee question’. Lyn Julius takes him to task in a Times of Israel blog:
The Balfour Declaration of 1917 demanded that a Jewish homeland in Palestine should not prejudice the rights and status of non-Jewish communities in Palestine. The British government, notably the foreign secretary Boris Johnson in a Sunday Telegraph op-ed this week, has latched on to this proviso, claiming that it refers to the unfulfilled political rights of the Palestinians, although only civil and religious rights are mentioned in the Declaration itself.
What Johnson and others have ignored, however, is the tail-end of Lord Balfour’s letter to Lord Rothschild: ‘… or of Jews in any other country’. As we all know, the Jewish communities of Europe were decimated by the Nazis, but the rights of Jews in Arab countries were also thoroughly trampled upon, resulting in the ‘ethnic cleansing’ of 850,000 Jews and the destruction of their ancient, pre-Islamic communities. 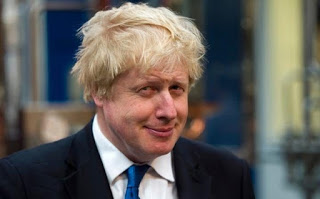 Clearly nothing was demanded of Arab states that were created out of the ruins of the Ottoman Empire: they violated any constitutional obligation they may have had towards their own Jewish citizens. A year or two before the declaration of the state of Israel, and before a single Arab Palestinian refugee had fled Israel, the Arab League agreed a Nazi-style draft plan to deprive the Jews of citizenship, threaten them with imprisonment and expel them, having first dispossessed them.
From the outset, the Grand Mufti of Jerusalem, Haj Amin al-Husseini, widely regarded as the leader of the Arab world, transformed each November anniversary of the Balfour Declaration, a symbol of British betrayal, into a rallying cry against the Jews, whether they were in Palestine, where he incited the deadly riots of 1920 and 1929, or elsewhere in the Arab world.
Growing up in Iraq in the 1930s, my mother recalls that every November gangs of youths armed with clubs dipped in hot tar would ambush Jewish schoolchildren on their way home.
A kindly Jewish lady opened her door to my mother, offering her shelter until the mob had passed. Others were not so lucky.
Wherever the Mufti went in the Arab world, persecution and mayhem followed against the local Jews. In 1921, after a Palestinian Arab delegation had visited Yemen to demand that the Imam stop all immigration to Palestine, the Orphans’ Decree was reinstated. This law, forcing Jewish orphans to be converted to Islam –  argues scholar S.D. Goiten – was the single most important reason why Jews were desperate to flee Yemen. In the 1940s, visits of Palestinian Arabs to Aden (then a British crown colony) became more common, and so did the expression of anti-Jewish sentiments.
From December 1931, when he convened a World Islamic Congress in Jerusalem, the Mufti ceased to speak of Zionists but Jews. The congress was followed by anti-Jewish violence in Morocco – in Casablanca in 1932, Casablanca and Rabat in 1933, Rabat and Meknes in 1937 and Meknes in 1939. In Tunisia, an entente between Tunisian nationalists and the Palestinian Arab Higher Committee sparked violence in Sfax in 1932.  The Algerian ulema declared a boycott of Jews in 1936, obeying the Mufti’s instructions.
British reports noted the intense propaganda in Yemen. Jewish refugees tried to make for British-controlled Aden. In 1939, a crowd was incited against the British and the Jews when they were shown fabricated photographs of Arab children hanging from telegraph poles. Other newspapers mendaciously reported that thousands of Arabs had been killed and bombs thrown at the Muslim holy places in Jerusalem.
But the worst incitement, with the deadliest consequences of all, took place in Iraq. Throughout the 1930s, Palestinian exiles together with the Mufti, along with Syrian and Lebanese emigrés, fanned the flames of Jew-hatred with false propaganda.
The Mufti himself, expelled to Iraq by the British in 1939, played a leading role in plotting a pro-Nazi military coup, led by Rashid Ali al- Gaylani, to overthrow the pro-British government. The pro-Nazi Gaylani government was the only Arab regime to sign a treaty with Nazi Germany and declare war against the British. Fearful that Iraq’s vast oil reserves would fall into Nazi hands, the British sent troops into Iraq. With the British army at the gates of Baghdad, the Mufti was forced again into exile – but not before he had primed the Arabs of the capital, together with defeated, returning troops, to unleash the Farhud (an Arabic word meaning ‘forced dispossession’) of 1941. Hundreds of Jews were murdered and their property looted and wrecked.
Other Farhuds followed – in Egypt, Libya, Syria, Aden and Morocco. Jewish citizens of Arab states became hostages to the conflict with Zionism, although they were loyal citizens, thousands of miles from the battlefield in Palestine.
Today barely 4,000 Jews remain in Arab countries of a 1948 population of almost a million – one of the worst cases of ethnic cleansing in the 20th century. But why do senior British politicians read into the Balfour Declaration what is not there, and disregard what is?
Lyn’s book UPROOTED will be published on 9 November. To pre-order click here.
Read post in full