TOP NEWS
http://jewishrefugees.blogspot.com/2020/11/nina-lichtenstein-is-independent.html
Nina Lichtenstein is an independent scholar and author of Sephardic Women’s Voices. Here she reviews Uprooted by Lyn Julius in Sephardic Horizons (Fall, 2020). The Jewish exodus from Muslim lands  and the flight of Palestinian refugees  constitute an unfinished population exchange, Julus argues, and Jewish rights have yet to be addressed. 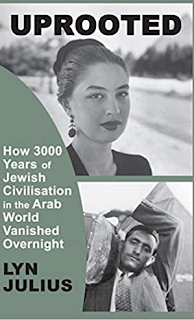 It is not uncommon that a book has its beginning as a blog where over time the posts reveal patterns or themes based on the preoccupations and interests of its author. This is what happened to Lyn Julius, a British blogger and journalist who is the daughter of Jewish refugees from Iraq. Uprooted: How 3000 Years of Jewish Civilization in the Arab World Vanished Overnight is the formidable result of ten years of research shared on her edifying blog Point of No Return: Jewish Refugees from Muslim and Arab Countries.

There have been few modern history books on Jews in Islamic lands penned by Mizrahim or Sephardim. Knowing that this author is both a woman and Mizrahi makes Uprooted a most welcome addition to the field of Jewish studies. The 340-page volume is packed with invaluable information for anyone seeking to deepen their understanding of the complex dynamics around the uprooting of the Jewish communities in the Middle East and North Africa and the issues of injustice that remain unaddressed by the governments of Muslim countries in the region, by the international community, and even to some degree by the State of Israel.
In Uprooted, Julius’s mission is to demonstrate how Mizrahi and Sephardic refugees from Islamic lands are victims of an injustice. She does this deftly by taking her readers on a journey recounting the events leading up to and following the “wholesale destruction of their millennial Jewish communities over a single generation” (243). Several converging historical forces are discussed as the situational underpinnings of the tragedy, such as the advent of the pan-Arab nationalist movement, the end of the Second World War, the establishment of the State of Israel,  and the end of the colonial era.
However, Julius underlines that the major root cause of this post-1948 exodus of over 850,000 souls “was pan-Arab racism, itself influenced by Nazism” (104). When Nazi ideas of Jewish conspiracy and control penetrated the Arab world in the 20th century, amalgamated as they were with Christian anti-Semitism dating back to the blood libel tradition of the Middle Ages, the earlier Muslim belief that Jews were powerless and inferior (as dhimmi) morphed into a modern version of Muslim anti-Jewish sentiment in which Zionism and being Jewish were conflated. Combine this with the manifest victory of the nascent state of Israel over its Arab aggressors in 1948 and the Palestinian Nakba and we can begin to understand the psychological underpinnings of the defeated party and how this fueled anti-Jewish sentiment in the Arab world, making it impossible for Jews to remain.
Julius also grounds her modern story in the rich, two millennia-long history that Jews have experienced in the region following the destruction of the First Temple in 586 B.C.E. and how their presence is often misrepresented as a “settlement,” as in the example of the Jews of Djerba who “preceded the Arabs on the island by 1,000 years” (10). Naturally, points like this bring attention to the Zionist/colonialist argument that is such a large part of the current liberal and anti-Zionist discourse on the conflict, for as Julius reminds us, Jews were organic to the region and it was the Arab conquest of the Middle East and North Africa which “subjugated indigenous peoples, colonized their lands and expropriated their wealth” (7).
So, “Who really colonized whom, and when do we decide to start to care?” she seems to be asking, challenging this often arbitrarily drawn line in the sand. In Uprooted, pages are also devoted to rectifying the often-held belief, or myth promoted by Islamic countries now void of Jews, that the lives of Jews in the region were haloed by peaceful coexistence with their Arab neighbors and landsmen. We are reminded that the safety of Jews was largely dependent on the attitude of the given current-day ruler and that this shifted randomly from generation to generation. Julius provides dates and details of numerous pogroms and injustices the Jews in this region were subjected to over the centuries.
The more time that passes from the Jewish exodus from Muslim lands, the more candid and revelatory the memories and testimonies of injustices suffered seem to become. The book tells us that not only did the Jews lose everything in their typically hurried and often clandestine departures, but because they were successfully resettled and absorbed in Israel, and other countries, their internationally recognized status as refugees by both the United Nations High Commission for Refugees and the United Nations Relief and Works Agency, has been ignored, willfully or by ignorance.
Overshadowed by the persisting focus on the enduring status of Palestinian refugees, inherited as it is by children and grandchildren of the originally displaced Arab population, the rights of the Jewish refugees have yet to be formally addressed. In effect, Julius says, this is a population exchange that has not been completed, as Palestinians have been refused absorption and citizenship to any surrounding Arab nation with the exception of Jordan. We are also reminded, however, that although the Jewish refugees in question were absorbed, it does not negate the social, cultural, and political discrimination they have battled in Israel. Though the Mizrahim constitute the majority of Israel’s current population and Mizrahi music, food, and aesthetics have recently become all the rage on the Israeli pop-culture scene, the ball has been dropped by the Israeli government on several occasions as it pertains to the pursuit of their rights of restitution and how their refugee status could and should be used in any peace negotiations with the Palestinians.
Many black and white photos of Jewish individuals from the Arab world, both well and lesser known people, social and cultural events both public and domestic, holy sites, important buildings and properties that once belonged to the now vanished communities and families, and documents appear throughout Uprooted. The result is a rich text teeming with information supported by archival and private materials that document much of the soul of what is lost.
For a reader who is already familiar with the story and complexities of Jewish refugees from the Middle East and North Africa, Uprooted offers a rich and varied sixty-page Appendix as a fresh, added value. Aside from tables, legal documents, and transcripts, we find a country by country chronology of important events relative to Jewish life going back to the late 1800s. It is especially the collection of brief personal narratives by Jewish refugees that add a level of intimacy to the more journalistic and historical narrative style of the main sections of the book.
Read article in full