TOP NEWS
http://elderofziyon.blogspot.com/2020/11/this-is-what-palestinians-consider.html
The Euro-Mediterranean Regional and Local Assembly (ARLEM) is an EU-affiliated group of local and regional representatives  from the European Union and its Mediterranean partners to maintain political dialogue and promote interregional cooperation on a local level, between municipalities.
Both Israel and “Palestine” are represented.
Earlier this year the mayor of Ramallah, Hadid Musa, was promoted to be a member of ARLEM’s Bureau. Members of Ramallah’s city council promptly resigned – because one of the other members of ARLEM is the mayor of Modi’in, Haim Bibas, and the Palestinians Modi’in call a settlement.
A small part of Modi’in is in the no-man’s land of the 1949 armistice lines.
Because of this, the city of Ramallah and the Al Haq NGO filed a complaint against ARLEM demanding that the EU exclude Modi’in (and presumably its mayor) from being a part of the organization.
According to Palestinian media, they succeeded. This is considered a major achievement. 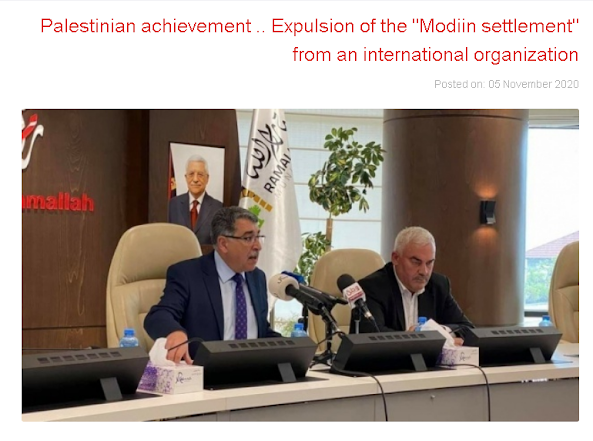 As usual, when Palestinians join any international organization, the first and only thing they concern themselves with is how to use that position to attack Israel. And every other member of these organizations have to tolerate their intolerance.