Travellers to Israel will find it hard to find ‘Jewish food’, alleges journalist Sarah Treleaven for BBC Travel (article not visible if you are in the UK). That’s because the Zionists appropriated ‘Palestinian’ dishes in order to construct an ‘authentic’ national narrative! Mizrahim and Sephardim who have been eating these foods for millennia are, not for the first time, invisible in the BBC’s world view.

“One of the biggest shocks for many foreign visitors to Israel is the lack of familiar Jewish cuisine. Where are the smoked salmon, bagels and cream cheese at breakfast? What about the delis that define Jewish cuisine from Montreal to Los Angeles? Or the kugel (a casserole made from egg noodles or potato), gefilte fish (an appetizer made from poached fish) and matzoh ball soup served at Jewish tables around the world?

“The early Zionists eagerly adopted Palestinian dishes, such as falafel, hummus, and shawarma, while in recent years Israelis have developed a more diversified palate. Still, ‘Jewish food’ remains scarce. But very few visitors know the reasons behind the dearth of it in Israel: despite the fact that the early settlers were mostly Ashkenazi Jews from Eastern Europe, they forsook traditional Jewish food both because of scarcity but also in deliberate service to the formation of a new national narrative.”
“Early adherents to the Zionist project, committed to creating a Jewish state in the territory now known as Israel, sought to abandon vestiges of their past. Just as the European settlers favoured Hebrew over Yiddish and khakis over frock coats and homburgs, they also purposefully chose to eat indigenous foods over Ashkenazi ones.
“The adoption of indigenous food lent the early European implants an air of authenticity. The production of local ingredients – the things that grew well in the desert and along the Mediterranean coastline, and the many dishes adapted from Arab kitchens – became part of the Zionist narrative.” 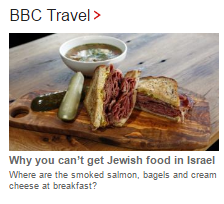 Edward Solomon has given Point of No Return permission to quote his rebuttal:

“This article is replete with out-and-out lies and falsehoods. Based on Sarah Treleaven’s limited and blinkered view of Jewish history and cuisine, Israeli food should consist of lokshen, bagels, gefilte fish, matzah ball soup, kugel, chopped liver and cholent.

The rich and varied panoply of Middle Eastern and North African Jewish foods, such as sabikh, tagine, tbit, kubbah, loubiah, kahi, and countless other dishes of Moroccan, Egyptian, Syrian, Ottoman Turkish, Persian, Indian, and Iraqi origins documented by writers such as Linda Dangoor and Claudia Roden, cooked and eaten in Israel, are completely glossed over in the interest of presenting a one-sided, politicised narrative that paints the Zionist Jews as Ashkenazic interlopers who stole Palestinian dishes to claim for their own.

This narrative falls down because (a) the majority of Jews in Israel are Sephardi and Mizrahi, not Ashkenazi, and (b) they did not misappropriate Palestinian foods, but brought with them the many and varied cuisines of their homelands, which are enjoyed today throughout the land of Israel.

This article is misleading and shortsighted in its attempt to distort Jewish history and cuisine to suit a distinctly Leftist, anti-Zionist narrative.”