TOP NEWS
http://jewishrefugees.blogspot.com/2018/01/bbc-hypes-up-discrimination-against.html
Timed to coincide with Benjamin Netanyahu’s visit to India,  an article written by the BBC Hindi journalist Zubair Ahmed was published on the BBC News website’s ‘India’ and ‘Middle East’ pages under the title “Israel’s Indian Jews and their lives in the ‘promised land’“. See this report by BBC Watch, and my comment below. 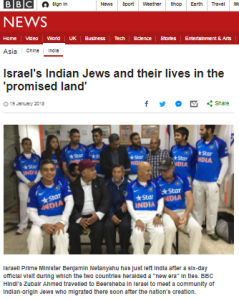 The article relates to one of the communities of Jews who immigrated to Israel from India – Bene Israel – and readers are told that: [emphasis added]

“…the biggest crisis faced by the community was in 1962 when the chief rabbinate prohibited Bene Israelis from marrying Jews from other communities.
Dr Weil said the community was up in arms. “They used to conduct sit-in strikes outside the chief rabbinate’s office saying they were Jews for more than 2,000 years and had the right to marry who they wanted.”
It took two years, but they finally succeeded in seeing their demands fulfilled.”

But is that account accurate? Did Israel’s Chief Rabbinate really ban members of the Bene Israel group from marrying other Israeli Jews in 1962?
Here is an article published in the ‘Herut’ newspaper on October 20th 1961 under the headline “The Chief Rabbinate rules: ‘Bene Israel’ from India are Jews and marriage with them is permitted”.

Here’s another extract from the BBC story:
“But for many families, the migration did not go as smoothly as hoped.
Mr Gudekar says that like many others of his community, his family were discriminated against because of their darker skin colour and because they could not speak fluent Hebrew.
They were allotted an inferior home, built of asbestos, and tin. Mr Gudekar says his father often regretted leaving their life in India.
But, he says, going back was not an option as they had burned all their bridges with Mumbai. “

My comment: No BBC report on Israel is complete without a dig alleging ‘discrimination’. If the Indian Jews felt they were discriminated against for their skin colour, the Ethiopian immigrants arriving in the 1990s would be a notch darker.
Since when was fluent  Hebrew a requirement for newcomers to Israel? The BBC reporter is  most likely unaware that almost all immigrants to Israel in the 1950s or 60s had to live in tent camps or tin or asbestos huts.