The love affair continues between Azerbaijan and the Jews, as a monument is unveiled to an Azeri Jewish military hero, Albert Agarunov. But the Azeris’ Armenian adversaries are not impressed, and the comments thread on this JNS News story is replete with insults from Armenian readers. 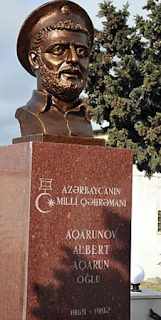 During another skirmish, Agarunov managed to disable two tanks by a method called the “Jewish sandwich” by his comrades.

He was wanted by the Armenians, who allegedly offered 5 million rublуs to catch him. In 1992, he voluntarily served in the Karabakh war; on May 8 of that year, he was killed by a sniper’s bullet.

He won awards from his country; a school in Baku is named after him; and in 2017, a memorial plaque was erected in front of his home.