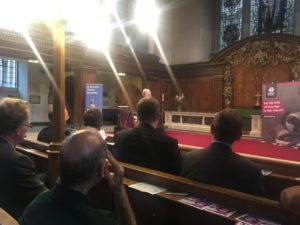 It is the 27th June 2017. I have just returned from an event at St James’s Church, an Anglican church in Piccadilly, London. It has a history of anti-Israel activism. Tonight Avi Shlaim was speaking at the ‘Embrace Annual Lecture’.  The official subject was to ‘explore Britain’s historical and current relationship with Palestine’. The main drumbeat provided another anti-Israel festival. This one was delivered with the impeccable presentation and captivating tones of Avi Shlaim.

This event wouldn’t have gone ahead without an anti-Israel under-current. The main purpose of the evening was to raise funds for ‘Palestinian refugees’, wherever they may be. When it came to the fund raising speech, we were even told that some ‘Palestinians’ in Akko (Israel) are living in what is basically a refugee camp. With this level of distortion trying to send church goers reaching for their wallets, a little balance would have been a very distracting and self-destructive strategy. It was simply not going to happen.

But I find events like this far more dangerous, far more damaging, than a university hate-fest or Al Quds day march. At a university, the hate is in your face, out in the open. Everyone knows the score. Here in the church it is very different. The hate is hidden, insidious and dealt out with a smile. Avi Shlaim starts speaking, and with a CV like his, who would doubt his words. A packed crowd of about three hundred and fifty, are about to feed from the poison tree, believing it to be hand-picked, freshly squeezed, fruit juice. The type of fruit juice the people in this church would buy in Waitrose.

Avi Shlaim and the missing pages

Shlaim recounts a history that is entirely devoid of balance and actual context. It isn’t that Avi is factually wrong about the nuts and bolts of the conflict, nor is it that Avi Shlaim is deliberately deceptive.  Shlaim is simply building his understandings on assumptions that are fundamentally flawed. It doesn’t matter how much he reads, or what data is placed on the page, Avi Shlaim will not be able to order it properly. For as long as he fails to address the basic mistaken concepts driving his ideas, he will remain forever wrong.

The Avi Shlaim fairytale begins with Balfour, and runs parallel with the Arab narrative of the conflict. Up until about 1936 he blames the Europeans for everything. He believes the only thing that stopped mighty democracies flourishing throughout the Middle East was colonial interference. Interestingly, the only democracy actually flourishing in the Middle East, he chooses to attack.

As is typical of the anti-Israel narrative (read fairytale), there is no cause and effect, and at every juncture, Israel is blamed for whatever it was that went wrong. The examples given for the collapse of Oslo were all related to settlements.  Arab terrorism was not mentioned once. Avi Shlaim draws a deliberately sinister image of Israel today.

At one point Avi Shlaim, talked up Ilan Pappe. That surprised me. Pappe is a historian who simply makes things up when it suits him. Shlaim even credited Pappe for helping on his own personal journey to ‘enlightenment’ (read mistaken understandings). He even mentioned the Palestine Solidarity Campaign as if it were a serious pro-Palestinian outfit, rather than an anti-Israel movement of hate, dripping in hard-core antisemitic ideology. It was at this point that it struck me. Avi Shlaim thinks the enemies of the Jews are basically non-existent. If you place antisemitism into a manageable box called ‘extreme right wingers’, and believe that the Arab States would all be functioning democracies were it not for British and French interference, then the world of Avi Shlaim begins to make sense.

Shlaim has led a cosy, well-to-do life in his Oxford circles. His distorted vision further skewed by his own radical student (Pappe). If he can promote the PSC without seeing the Holocaust denying, Jew hating, conspiratorial world, that infests so many of its supporters, then Avi Shlaim is taking everything at face value only.

And this foolish old man is dripping poison into a crowd that are turning more anti-Israel with every point raised. Shlaim lives in a fantasy world, where the two-state solution is on the table, ready to be signed, if only Israel were accommodating enough, humane enough, to agree to the peace on offer. Yet he talks within an environment where that option does not exist to those who take the Palestinian side. The anti-Israel drumbeat is a one state drumbeat. ‘From the river to the sea’. When you empower it, whatever you may prefer, you empower those that seek the destruction of the State of Israel. The naive fairytale of Avi Shlaim becomes truly dangerous in an environment such as this.

A no win situation

Then the Q&A started. 95% of the undecided in the room had been sold a dummy version of the conflict. If they were not anti-Israel before the event, they probably are now. What do you do? You cannot challenge a mistaken perception with a single question. There is no magic bullet he has not heard before and every question you ask, will be ignored or batted away by an expert witness. The more aggressive and frustrated you become, the more effective the response. The louder you ask the question, the louder the applause he receives as he answers. So how do you undo the damage that has been done? If pro-Israelis attend these events, they should go to change minds. Which means we have to find a way of changing them. Sometimes our own actions wins the day even more for the anti-Israel crowd. Not every event is the same. We need to have more than one trick in our arsenal.

As we left, the crowd had been suitably stirred up. We were told to put our ‘jack boots on’. Those considered of identified as Zionist were insulted, heckled, threatened.  The event had done its job.

I fight antisemitism in the UK. I am currently working on some in depth long-term projects. My usual activity into antisemitism involves attending hate events, frequently I do this undercover. I also fight the revisionist narrative and am engaged in historical research. The generous donations I receive from the community allow me to carry on with all of this work.

I have also opened a fundraising page on Jewcer and you can donate from anywhere in the world (including the UK).

Please consider helping. Every single £ or $ is truly appreciated. Please do share the page with anyone you feel might be interested in helping. The page takes donations in dollars and donations there are meant to be tax deductible.

If you prefer my usual PayPal donation page it is here:

The post Avi Shlaim, the foolish old man and the adoring church goers appeared first on Beyond the great divide.