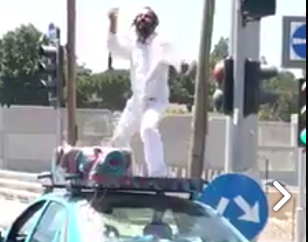 The Israel Speaks Arabic Facebook page posted this video showing a Haredi man dancing on top of his car to a song that he was blaring during an unusually long red light.

Arab media picked up on this, calling it “shocking,” because the song is a very popular Arabic song by an Emirati singer. It apparently is being used in Egypt as a song of support for Egyptian president Sisi.

The man dances until the light turns green when he goes back into his car.

The graffiti on the car says “simcha,” or “happiness.” Chances are the driver is a Breslov hasid.

I’m not sure what this signifies – except that Arabs really do read the official Israeli Arabic hasbara media. The video has received 202,000 views so far.