Yesterday, Australia extended its existing ban on Hezbollah’s “military wing” to the entire group, declaring all of Hezbollah a terrorist organization.

As we saw only this week, the murderer of Eli Kay in Jerusalem on Sunday was done by a prominent Hamas “political wing” member, praised by Hamas’ “political wing,” and even the political leadership of Hamas didn’t distinguish between its supposed wings when it protested Britain’s designation of the entire organization as a terror group, instead defending terrorist attacks as “legal.”
Even Australia’s description of the Qassam Brigades describes Hamas as a whole as “an ideologically and religiously motivated violent extremist organisation and political party.”
After the British decision, I imagine that Australia will follow suit to declare all of Hamas as terrorist, and it has probably started the process. 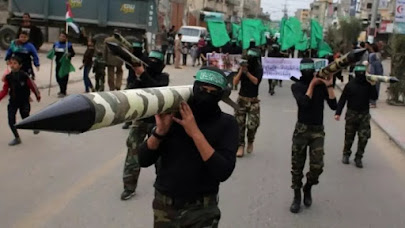 It is notable that when Australia lists Hamas’ Al Qassam Brigades terrorist activities, it highlights its rocket and incendiary balloon attacks on Israel as terrorism:

From 10-21 May 2021, Palestinian militants, including from the Brigades, launched over 4,000 rockets into Israel from Gaza. The Brigades’ official spokesperson claimed its responsibility for multiple strikes against Israel during this period.
On 29 December 2020, Palestinian militant groups, including the Brigades, launched rockets into the Mediterranean Sea off Gaza during joint military drills. According to an official Brigades statement, the exercises aimed to simulate expected threats posed by Israel and to develop the capability of Palestinian resistance fighters for conflict.
Throughout August 2020, Palestinian militants in Gaza launched hundreds of incendiary and explosive balloons and at least 16 rockets into Israel before a ceasefire between Israel and Hamas was reached on 31 August. The Brigades probably supported some of these attacks.
…On the basis of these examples, the Brigades is assessed as responsible for directly or indirectly engaging in, preparing, planning, assisting in or fostering the doing of terrorist acts.

Most countries and NGOs, while generally condemning Hamas rocket attacks on Israel, have avoided calling it “terrorism” – even though it clearly is. It is good to see that Australia does.
Let’s hope they do the right thing soon and extend their ban to all of Hamas.