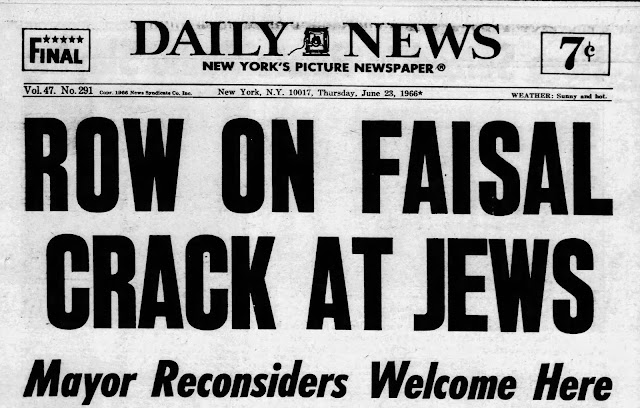 In 1966, Saudi King Faisal showed what he meant when he said he was against Zionists.
From the New York Daily News, June 23, 1966:

Saudi Arabia’s King Faisal declared today, while Washington officials shuddered, that Jews throughout the world are his country’s enemies.

Under heavy questioning at a newspaper luncheon, the monarch finally poured out his deep feelings about the historic conflict which has divided Jews and Arabs.
“Unfortunately the Jews throughout the world provide assistance to Israel . . .,” he said. “We consider those who provide assistance to our enemy is our own enemy.”
Faisal’s words, which seemed to tumble out without premeditation, triggered an immediate diplomatic rhubarb which clouded the start of his state visit to the U.S. Even while the Saudis were feting President Johnson at a glittering embassy dinner, the storm built up. And Secretary of State Dean Rusk was called to late night conferences on the fate of the king’s New York visit. A spokesman said no final decision was reached immediately and meanwhile there would be no comment.
The hawk-nosed king, dressed in flowing Bedouin robes, gave frank answers to questions from the audience, speaking Arabic with a State Department interpreter translating.
“It has never been our objective to exterminate Israel and throw it into the sea.” Faisal said. “. . . This impression has been spread around by Jewish propaganda.”
But he said that present Arab rulers were as determined as ever to reclaim the former state of Palestine and evict the Jews who immigrated to Israel after the new country was established in 1948.
“Zionism has . . . through aggression … taken over that country … occupied it .. and thrown its people out.” he said.
On other matters, defending Saudi Arabia’s Islamic penal code, he said: “We are going to preserve — continue— the present practice of punishing thieves by chopping off their hand, because it is derived from the Koran. It has served us very well and almost eliminated crime in our country.”
JTA added, “The king said ‘the Jews’ had been guilty of “violation of every human right” of the Arabs.”
As indicated in the article, King Faisal went off-script to make these statements, revealing the truth that people even today refuse to admit: anti-Zionism is just another form of antisemitism.
Of course, the Saudi government then went into firefighting mode, and days later issued a statement that he only meant Zionist Jews, not all Jews: “We are not against the religion of the Jews, but against the Zionists and the Jews who help the Zionists.”
Even that clarification is antisemitic, since it still singled out Jews who help Zionists, not non-Jews.
Nowadays the Jew-haters are much more circumspect in their words, knowing that explicit hate of Jews is forbidden but explicit hate of the Jewish state is celebrated. Still, when you catch them off-camera, off-mic, or in drunken tirades on Twitter, you almost invariably discover that they really meant Jews all along.
Notice that Faisal used the terminology “occupation” to describe Israel in 1966 – before “occupation.”
One other difference between 1966 and today: In 1966, reporters actually would ask tough questions to Arab leaders. Now they generally treat them with kid gloves because they don’t want to jeopardize their access to the same rulers in the future.