If you need a reminder that Iraq is a mosaic of different ethnicities and religions, watch this programme from the Arabic ABN TV Channel, broadcasting from the US. The Channel which is run by Aramaic-speaking Christians, asked all the different communities of Iraq now dispersed around the world – Armenians, Turkomans, Chaldeans, Mandaeans, Assyrians, Jews and others – to convey season’s greetings to viewers in each of their languages.

At 31 minutes to 36 minutes you can hear a message in Hebrew from David Kheder Basson, who now lives in Israel. Basson also wished Jewish viewers a very Happy Hanucah, which this year coincides with Christmas. He followed it with a translation in Arabic.

Basson (pictured) reminded the programme’s presenter that the Jews of Iraq did not speak Hebrew, but Judeo-Arabic. He ended his segment with a few words in that dialect. He told viewers that it is close to that spoken in Mosul. 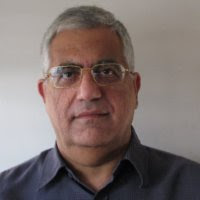