Then there is J-Street.

J-Street is an anti-Israel organization that has been artificially boosted by the White House and the media as the home for liberal Jews, even though its positions are outside the mainstream of the majority of Jewish Zionists, including liberals.

So while the overwhelming majority of American Jews support Benjamin Netanyahu – the democratically elected leader of Israel – J-Street does everything they can to undercut him, and Israeli democracy.

As long as the security of Israel is not compromised by that solution..

J-Street has no such caveats.  They insist that the world impose a solution on Israel, creating a Palestinian state unilaterally, that the majority of Israelis and Zionists oppose. Israel’s security is simply swept under the rug with the fiction that Palestinians will become automatically peaceful as soon as they have any state they can call their own – even if they do not sign a peace treaty.

And that, in a nutshell, is both why J-Street is anti-Israel and why they do not represent liberal American Jews who support Israel.

But when the designated American ambassador to Israel called J-Street “worse that kapos” – a term I would not use personally, but one that indicates the depth of how J-Street uses its pretense of being “pro-Israel” as a screen to hide its anti-Israel activities – the media that has boosted J-Street beyond its actual importance is now trying to claim that there is no daylight between J-Street’s positions and that of most liberal Jews.

So we see these tweets from the New York Times writer Matthew Rosenberg pretending that J-Street represents “dovish Jews” and “Jews who support two-state solution:”

That’s not all. Look at this lying headline from New York magazine:

As if “liberal Jews” and “J-Street” are synonymous.

And the worst example of a Jew who tries to pretend that J-Stree’s positions, and therefore his own, are mainstream for American Jews, is Rob Eshman of the Jewish Journal of Los Angeles, who wrote an entire absurd article on this theme: 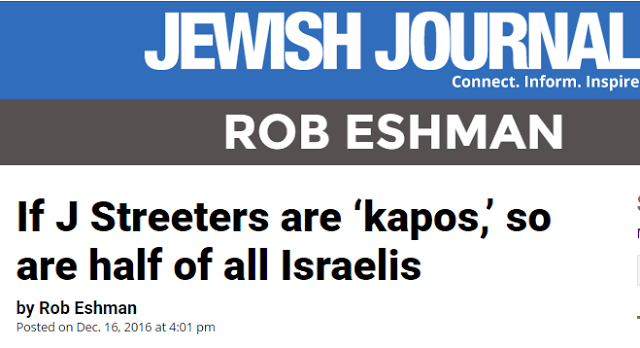 All of these tweets and headlines are purposeful lies meant to mainstream an anti-Israel organization as somehow being pro-Israel.

And all these examples prove is that one cannot trust reporters who cannot distinguish between reality and their wishful thinking.