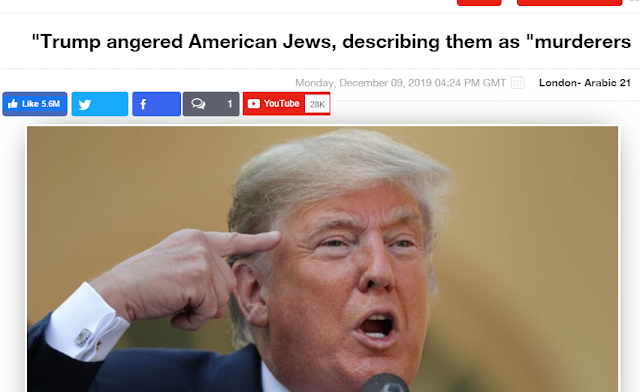 The part of the speech at the IAC that President Trump’s critics have been mostly concentrating on as “proof” of his supposed antisemitism was this one:

A lot of you are in the real estate business because I know you very well.  You’re brutal killers.  (Laughter.)  Not nice people at all.  But you have to vote for me; you have no choice.  You’re not going to vote for Pocahontas, I can tell you that.  (Laughter and applause.)  You’re not going to vote for the wealth tax.  “Yeah, let’s take 100 percent of your wealth away.”  No, no.  Even if you don’t like me; some of you don’t.  Some of you I don’t like at all, actually.  (Laughter.)  And you’re going to be my biggest supporters because you’ll be out of business in about 15 minutes, if they get it.

The critics in the West have been concentrating on this section: 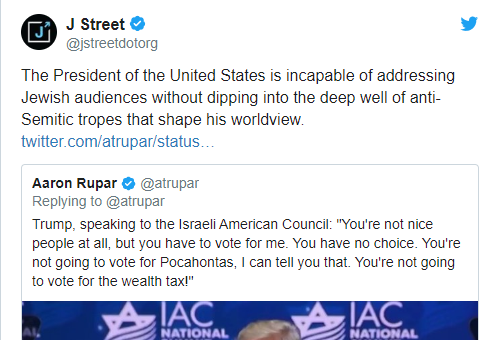 The antisemitic stereotypes that J-Street and others are concentrating on is that, in their interpretation of what he said, that  Jews are rich and will vote for Trump to keep their wealth.

Arabic sites are concentrating on a different phrase:

Trump called Jews “brutal killers” in his speech – but Western critics didn’t go crazy over that.

But isn’t calling people brutal killers much worse than calling them rich?

To English speaking audiences, even the most virulent Trump hater understands that Trump was joking when he said to Jews they were “brutal killers.” Arabic speakers didn’t see the humor in that, perhaps because there are so many real brutal killers in the Middle East.

Western Trump critics, however, are far more attuned to confirmation bias that Trump is a right wing antisemite who says Jews have too much power. So they skipped the “murderers” part and went right to the “rich” part.

What both the Arabs and leftist Jews simply cannot understand is that most of Trump’s speech was a comedy routine. The entire anecdote on the Jerusalem embassy moving – with all its many asides like this one – was an extended bit, one that he has actually honed from previous speeches.

Once again, Trump’s critics simply don’t get him. Unlike most Americans, they can’ distinguish between  when he is making a joke and when he is serious. They are making the exact samemistake the Arab media is making in reporting on his speech.

And that’s why Trump won in 2016. Because his fans understand that he loves to bait his critics – and his critics fall for it every single time. Even when he tells them that he is doing it, as he did later in his speech:

No, but these people are going crazy.  When they all scream, “Four more years, four more years,” I always say, “Make it 12 years and you’ll drive them crazy.”  Twelve more years.  But if I don’t get the build- —

The very people who are supposedly being insulted to their faces get the joke and start to chant “twelve more years,” just to drive Trump’s critics crazy.

Later in the speech Trump soberly addressed antisemitism. That section isn’t quoted by his left wing critics, because they aren’t listening for it. It wasn’t art of the comedy routine.


Throughout history, anti-Semitism has produced untold pain, suffering evil, and destruction.  We must not ignore the vile poison or those who spread its venomous creed.

My administration is committed to aggressively challenging and confronting anti-Semitic bigotry in every resource, and using every single weapon at our disposal.

…My administration strongly opposes this despicable [antisemitic]  rhetoric.  And as long as you’re — and I am standing before you, as long as I’m your President, it makes no difference.  It’s not happening.  Okay?  It stops at my desk.  (Applause.)

I said in my State of the Union Address last year, “With one voice, we must confront this hatred anywhere and everywhere that it occurs.”

This episode shows why Trump will probably win in 2020. Because Trump knows the weaknesses of his critics. He knows that most Americans understand him better than the paid pundits at CNN and the Washington Post who, instead of actually listening to him, are spending their time looking for “gotchas.”