A couple of days ago this tweet received a lot of attention, with over 5000 Likes:

It is an obvious lie. I even offered him a $10,000 bet that he couldn’t provide proof of this incident, and he blocked me in response.

When someone more sympathetic asked him details on this fictional incident, here was Samer’s answer:

Samer, whose profile says he lives in Chicago, has over 35,000 followers, many of whom believe his lies without question – because they subscribe to his philosophy that Zionists are not human.

Human Rights Watch has some 4 million followers and it followed about 20,000 people back – half of one percent. Samer is one of them.

Here is my list of who HRW follows that also block me, a veritable Who’s Who of Israel haters and leftists who cannot stand the truth. 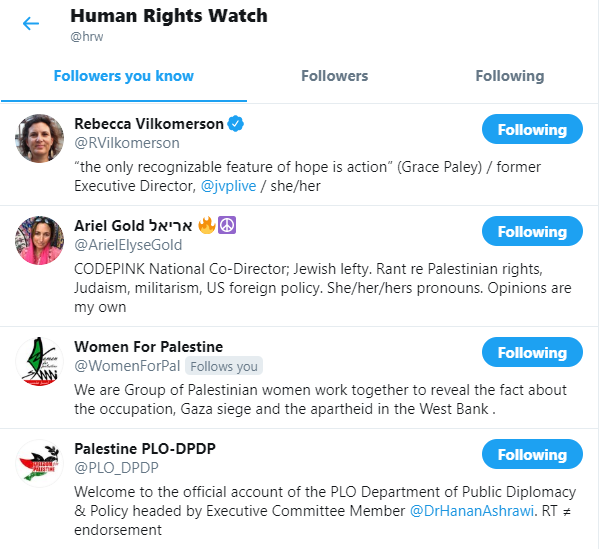 I’ve mentioned before that Human Rights Watch doesn’t treat Zionist Jews as if they are human. Here we see that they seem to be fans of people who say that explicitly.

(To be fair, HRW also follows some prominent Zionists, but those all tend to be official spokespeople or organizations, not random anonymous people like Samer.)