Arab countries, including Saudi Arabia, the United Arab Emirates, Egypt, and Jordan, issued formal condemnations of the attack on the Pittsburgh synagogue Saturday.

An official source at the Saudi foreign ministry announced the kingdom’s “harsh condemnation” of the attack on the synagogue, stressing the Saudi authorities’ rejection of such “criminal acts and their extremist ideology.”

“The UAE extends its deepest sympathy to the families of loved ones affected by the unwarranted violence in Pittsburgh,” said the UAE Embassy in Twitter, “We condemn hate-based violence against anyone because of their religion, race or beliefs.”

The Jordanian government condemned the attack, calling it “terrorist”, and expressed its condolences to the government and the American people and to the victims’ families. Jordan also stressed its “firm position to condemn crimes of hatred and terrorism in all its forms and whatever their motives,”,saying that “terrorism is a common enemy which threatens common human values.”

Egyptian Foreign Ministry Spokesman Ahmed Hafez expressed his full condemnation of the shooting, “based on Egypt’s firm stance to reject all forms of terrorism, violence and extremism, including targeting places of worship.”

Even Hamas condemned the shooting, saying it was a “cowardly terrorist act – and then he
“We, as Palestinians, as victims of Israeli terrorism, know the meaning of terrorism and its destructive effects.” 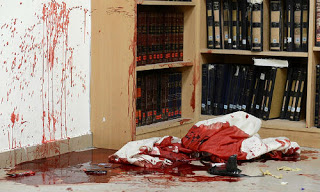 You can say that. Because when five Jews were murdered in a synagogue in Jerusalem in 2014, Palestinians celebrated.

And  while Jordan officially condemned that attack, the Jordanian prime minister sent letters of condolence – to the families of the attackers!

No other Arab country, as far as I can tell, even pretended to be against that massacre in Jerusalem. Even though the victims were civilians. Even though it occurred on the west side of the Green Line.

Jordan’s pretense to “condemn crimes of hatred and terrorism in all its forms and whatever their motives” rings especially hollow when that country continues to protect Ahlam Tamimi, the terrorist proudly responsible for the Sbarro pizza shop bombing, and the kingdom refuses to extradite her to the US for the Americans murdered by her.

The Pittsburgh massacre is an excuse for Arab countries to pretend that they aren’t antisemitic and that they are against terror. But since we see that they have nothing bad to say about the murder of Jews who are worshiping in synagogue in Israel, it is clear that these condemnations are for public relations purposes, and they really don’t care.