This article from 1934 brings on a sense of deja vu:

Just like today, people were lecturing the Jews on how they need to act for their own good. If they act at all like a proud people who stand up to their enemies, then the enemies will get upset and it will be the Jews’ fault.
It was all out of “love,” though. Professor Cadbury had no doubt that he loved the Jewish people and only wanted the best for them. If only the Jews would listen to his sage advice, the Nazis would realize that they are making some innocent mistakes and will change their ways to good.
And if Israel would only make a few more concessions to the Palestinians, then they would suddenly become peaceful people and not demand anything more.
Even though – for those willing to listen to them in their own languages – both the Nazi and Palestinian leaders say quite explicitly that they don’t want compromise; they want total victory over their “oppressors.”
I hate to draw analogies with Nazis, but this article sound exactly like so many op-eds and international diplomats today lecturing Israel on how to be more peaceful in the face of genocidal intentions.
The analogy doesn’t end there. The liberal Jews of the Reform Movement who hosted Cadbury were very sympathetic to his message. 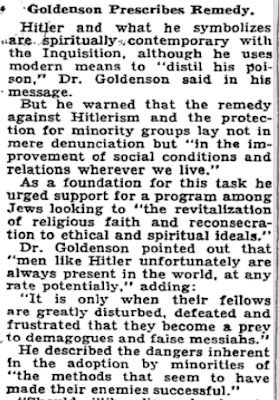 Just like today, liberal Jews are more willing to listen to the messages of their “friends” who rail against Israeli policies than to most Israelis themselves.
(h/t Bill Poser)