The Cairo Book Fair is a laboratory of antisemitism in Egypt, and reflects the strength of feeling against Israel.  Elder of Ziyon reports that Egyptians were upset at the visit of the Israel ambassador to Egypt, David Govrin, with an aide. And now, the US has shut down its booth at the fair in protest against books like Mein Kampf and the International Jew being on sale. 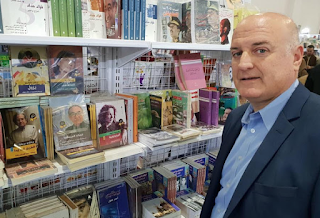 Egyptians on Facebook expressed their displeasure, some saying that had they known they would have beaten them ( ieDavid Govrin and his aide).

People started to get angry at the head of the book fair for allowing this to happen.

In response, the head of the General Authority for Books, Haytham Al-Haj Ali, made a brief statement asserting that the visit was informal and that the embassy did not inform the management of the exhibition and that they did not hear about the visit until after it was completed.

Govrin visited the exhibition as a normal visitor, buying a ticket and waiting in line like every other visitor – and therefore no one could stop him.

The Cultural Committee of the Egyptian Journalists’ Syndicate condemned the “childish behavior of the ambassador and his attempt to suggest a state of cultural normalization,” which they said will not dissuade the Egyptian people from confirming their rejection of all forms of normalization with Israel.

The United States Embassy closed its booth at the Cairo International Book Fair due to the presence of antisemitic materials, the Simon Wiesenthal Center reported on Wednesday. 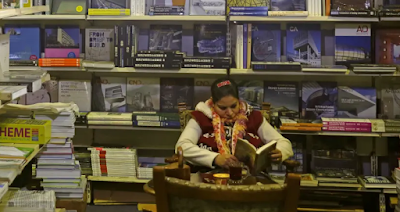 Earlier this week, the Jerusalem-based center reported that staples of antisemitic literature were featured in the Egyptian stand at the 2019 Cairo International Book Fair, including The Protocols of the Elders of Zion, Henry Ford’s International Jew and Hitler’s Mein Kampf.
US Embassy Chargé d’Affaires Thomas H. Goldberger responded to the Wiesenthal Center exposé by deciding to close the US booth in protest.

“I immediately contacted the Egyptian government on the phone and in writing to protest the presence of antisemitic materials at the Cairo International Book Fair,” wrote Goldberger in a statement, “and to demand that it take immediate action to remove the materials.”

Considered the most important event in the Arabic publishing world, last year’s book fair drew a crowd of over two million attendees as well as publishers from over 27 countries, according to the London-based newspaper Asharq Al-Awsat.