Luc Descheemaeker (aka O-Sekoer) has been named the “cultural ambassador par excellence” for the city of Torhout, Belgium.

Belgian news site Nieuwsblad says he deserves the award because his cartoons have been shown worldwide.

This is true. He was a winner of Iran’s Holocaust Cartoon contest with this entry. 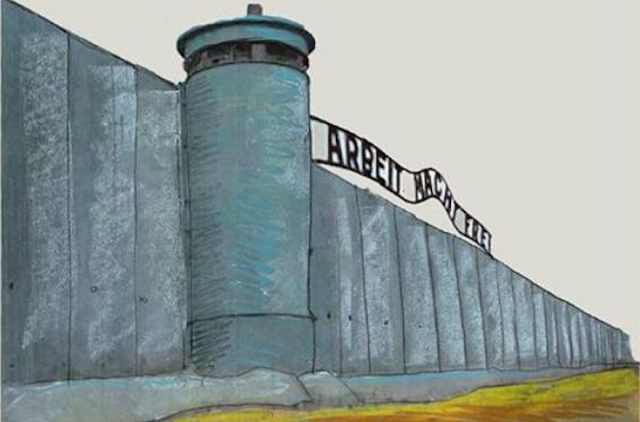 The town of Torhout is quite aware of this because there was worldwide publicity for the school he taught at honoring him despite this clearly antisemitic cartoon.

And he has drawn other antisemitic cartoons as well, like this one that blames Jews for being blown up by terrorists: 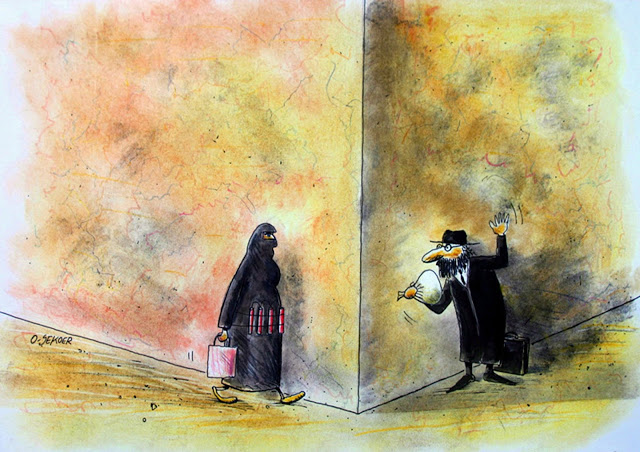 This one with a similar motif doesn’t bother with the seeming even handedness of the previous cartoon, squarely blaming Jews for terrorism: 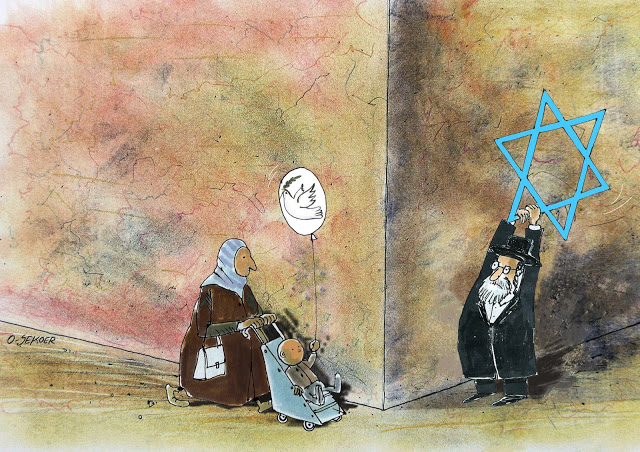 There is no way for any honest person to interpret these cartoons as anything but antisemitism.

A JTA reporter in Belgium who covered the previous honor for Descheemaeker was shaken by the tacit support for antisemitic expression in Belgium:

I wanted to see whether the school can get away with defending the maker of blatant anti-Semitic imagery by claiming to be neutral on its celebrated teacher’s extracurricular activities. So I repeatedly queried the board of education, the royal house, the Queen Paola Foundation, the municipality where the school is located and Belgium’s federal center against discrimination. I received one written response, from the foundation, saying it had no comment for me.

This see-no-evil approach from government offices in a country whose leaders often declare a zero-tolerance attitude to anti-Semitism surprised me. But the real shock was the response from the Belgian media to JTA’s coverage of the affair.

De Morgen, one of Belgium’s largest and best-respected dailies, ran an article that omitted reference to Descheemaeker’s caricatures of Jews. It described the Iranian competition as a “controversial” affair “themed on the Holocaust,” which the paper said was instituted as a statement about freedom of expression following the publication of insulting caricatures of the Prophet Muhammad in Denmark.

(UNESCO, the cultural arm of the United Nations, had called the contest “a mockery of the genocide of the Jewish people.”)

Descheemaeker, who is described in the paper as an internationally acclaimed caricaturist, is quoted as saying in reaction to the uproar created by his work: “There is still such a thing as freedom of expression.”

Confused, I reached out to Joel Rubinfeld, founder of the Belgian League Against Anti-Semitism and former president of the CCOJB umbrella group of French-speaking Belgian Jewish communities. I wanted to know whether Belgian education officials were more tolerant of expressions of anti-Semitism than their counterparts from other Western European countries.

“It’s a problem,” he said. “We’ve encountered a number of cases where schools did not take the necessary measures when Jewish pupils were targeted in anti-Semitic bullying, for example.”

A teacher who last year told a Jewish high school student, “We should put you all on freight wagons,” was allowed to keep his job following an internal inquiry. It ended with him apologizing while denying any anti-Semitic intent in the first place.

One student was forced to leave his public school and was enrolled in a private Jewish one last year following harassment, which included a threat to “break his skull” if he showed support for Israel. Also last year, the Belgian media reported on the online shaming by classmates of a pro-Israel high school student. He also left the public education system for a Jewish school.

This honor happened in January. No one in Belgium thought it was controversial enough to even raise an eyebrow based on media reports.

When naked Jew-hate is excused under “freedom of expression” that means that antisemitism is officially condoned in Belgium.