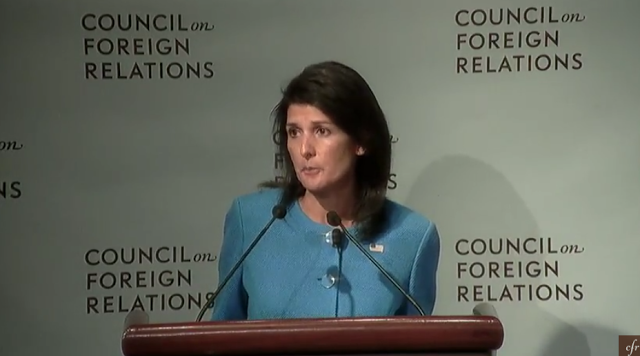 The New York Times has an article on Ambassador Nikki Haley’s speech to the Council on Foreign Affairs that is a textbook example of media bias.

Every quote that the article by Somini Sengupta  uses is followed by a claim by the reporter that Haley is lying. It is written like a fact check more than a news article.

As a result it fails at both.

Evidence is needed in court, not a public conversation. Haley may not have offered evidence but she did explain exactly why she calls the Human rights Council “corrupt.” From her speech:

[T]he Human Rights Council is so corrupt. I mean, if you look what countries do is they get on it to protect themselves, to make sure that the fingers never pointed at them instead of actually looking at what we need to be doing for human rights for people around the world, and that’s part of it. When you’ve got bad actors that actually sit on the Human Rights Council, it makes you call into question what it is we’re trying to do.

“Corrupt” is not an inaccurate summation of what Haley’s points are.  But the NYT ignores that.

Later in the article, Sengupta comes back to this topic, and throws in another dubious fact check:

She used her address to deliver a pointed attack on the United Nations Human Rights Council, the main international body meant to promote and defend human rights.

“I mean, the Human Rights Council is so corrupt,” she said, adding that it includes “bad actors” who use it to protect themselves.

Several countries with poor human rights records, including China and Saudi Arabia, have indeed won seats on the council. But the United States has itself used its seat to forcefully defend its allies, including Saudi Arabia, which has been accused of abuses in the war in Yemen.

I am not aware when the US “forcefully” defended the Saudi campaign in Yemen at the UNHRC. There was hesitant support for a Saudi role at the UNHRC in 2015, with the caveat that the US hoped that Saudi Arabia would practice what it preaches in the group. by If it happened, it is surprising that Sengupta didn’t note it in her article last year about criticism of the Saudi role in the Council.

At any rate, the moral equivalence that Sengupta is trying to draw between the US and the Saudis is obscene, and her assertion – to use her words, “without evidence” – does not belong in this article unless she can back it up.

She cited what she called a “ridiculously biased report attacking Israel,” and criticized the Security Council for holding monthly meetings about the Israeli-Palestinian conflict. (The council also discusses Yemen every month and Syria three times a month.)

Let’s set aside how disgusting it is for Sengupta to compare a permanent item on the Security Council agenda on Israel – because of the extreme crime of Jews building houses – with ones on two countries where hundreds and thousands are being brutally killed every month.

Let’s just see if Syria is indeed discussed three times a month at the Security Council.

According to its website, in 2016 there were 13 meetings about Israel, 25 about Syria and 11 on Yemen. (There were two others involving Israel – to extend the UNDOF and UNIFIL mandates – but I’m not counting them.)

By any measure, Sengupta is not accurate in her description of how often the UN discusses Syria. Most of the 2016 Syria discussions were in the context of discussions (and vetoes by Russia and China) of Security Council resolutions.

For someone who styles herself as a fact checker, Sengupta is not very good with facts.

Haley did discuss Israel, which Sengupta barely mentioned.  Here is what Haley said:


Really, all I’ve done with Israel is tell the truth. So when I saw something wrong, I called it out. It was amazing to me that we had a briefing on the Middle East and literally all it was an Israel-bashing session. And so I was confused because there were so many other issues that needed to be talked about that were in the Middle East and that was just all they talked about. And they do it every single month. And so it was really just saying, with all the issues in the world this is what we’re going to talk about? So that was the logic with that.
I will tell you, there is such a huge want of so many people to see Israel and the Palestinian Authority come together. And I think that’s why you have seen President Trump, who’s just adamant that this is going to happen, do that. I met with the representative from the Palestinian Authority, and we talked about the situation here at the United Nations. And what I said to him was: Look, we just want balance. We just want it to be fair. And in doing that, what I, you know, had asked of him was, don’t put any more resolutions on the table bashing Israel. But at the same time, we’re not going to be able to really support you going forward in moving up if you don’t come to the table and negotiate.
So we’ve actually been pretty tough on both in terms of Israel having to come to the table and the Palestinian Authority coming to the table. I think that they will. The two need to decide what that solution looks like, and the two need to come together. They both claim they are. We’ll see what happens.