If you look at the video of the swearing-in ceremony of US Ambassador to Israel David Friedman, you will notice that he slightly changed the words he was repeating from Vice President Mike Pence.

This is because traditional Jews try not to swear, due to the seriousness of the prohibition of taking God’s name in vain.

Traditionally, the swearing in ceremony used by Western governments was meant specifically to exclude Christians from being part of the government. The BBC notes:

Jews were excluded by the oath less deliberately, as it included the words ”on the true faith of a Christian”, as well as being sworn on the Christian Bible. The Jewish Liberal David Salomons was elected to Parliament in 1851 and took the oath, taking it upon himself to omit the problematic phrase. He was ejected from his seat a few days later, with a £500 fine for voting illegally in Parliament. Jewish MPs were allowed to swear without the phrase by Jews Relief Act 1858.
Affirming, as an alternative to swearing, was introduced by the Parliamentary Oaths Act of 1866, but did not at first apply to atheists or agnostics. The law applied to “the people called Quakers” and anyone else who was already allowed to affirm in a court of law, but atheists were not supposed to affirm in court because the affirmation was made “in the Presence of Almighty God”.
The right to affirm in Parliament was finally extended to atheists in 1888, after Charles Bradlaugh, founder of the National Secular Society, was thrown out of the Commons four times for atheism, and re-elected each time.
He had first of all tried to make the affirmation which was intended for Quakers, and then later tried to take the standard oath (perhaps, like the republican Tony Banks in 1997, with his fingers crossed) but MPs who knew about his beliefs refused to let him.
Bradlaugh administered the oath to himself and was expelled anyway. Only on his fifth election to Parliament in 1886 was he allowed to swear and take his seat, and it was his Oaths Act which in 1888 extended the right to affirm to atheists and anyone else who objects to swearing.

The Jewish objection to swearing for office today is not based on the problems of swearing to a Christian deity but rather to an extreme reluctance towards taking any kinds of oaths.

So even in the Israeli army, religious Jews have the option of saying that they “declare” instead of “swear” to perform their duties.

Of course, the refusal to say “I swear” is not a dispensation for lying under Jewish law. Antisemites like to pretend that the Kol Nidrei prayer on Yom Kippur which is meant to annul oaths is somehow a loophole to allow Jews to lie to non-Jews. It isn’t.

Friedman placed a kippah on his head for the ceremony, and he placed his hand on a Hebrew Bible – Tanach, as can be seen in this detail from a photo tweeted by Shmuley Boteach. Clearly he took this ceremony seriously. 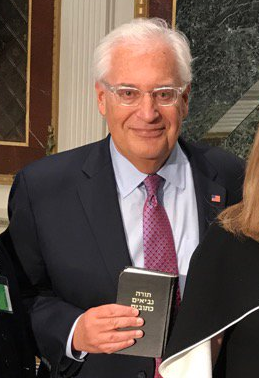 His presumed grandkids running around didn’t seem to take it quite as seriously, though!