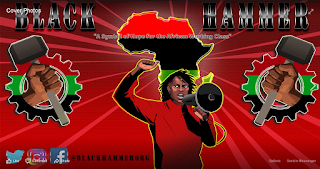 A person named Gazi Kodzo is a radical black socialist who heads an organization called Black Hammer. He may be the only member but he does have tens of thousands of followers.

🖕🏾 Anne Frank! As a Black Child in america all through school I was propagandized to mourn a BECKY. I wasn’t told about the COUNTLESS Black girls america GENOCIDED! Indigenous girls america GENOCIDED! Palestinian girls that israel is killing through GENOCIDE right now!
‬
How fucking played I feel! KNOWING I was crying in a class room over some KAREN in EUROPE while sitting in a school that’s resting on land that is filled with the BLOOD & BONES of NAMELESS African and Indigenous GIRLS!
‬
‪Genocide wasn’t even a WORD until it happened until the WHITE ON WHITE CRIME of the holocaust! In 1949! THOUSANDS of African and Colonized tribes WIPED OUT OF EXISTENCE! MILLIONS OF MY PEOPLE KILED due to EUROPEAN Colonialism for 500 years with NO WORD to define it UNTIL it happened to Anne!‬
There is a REASON america pushes Anne Frank into our heads and not COLONIZED GIRLS who have and are dying due to colonial genocide! Colonizer Jews went through GENOCIDE for a couple years IM A COLONIZED AFRICAN Im in Genocide RIGHT NOW! AND HAVE BEEN IN GENOCIDE FOR 600 YEARS! 🖕🏾 Anne Frank!
‬
If you are a colonized person and this makes you feel uncomfortable or Immoral for thinking this. BITCH you’re brainwashed to measure your humanity off of how much you cry over the paper cuts of your oppressor while your own people’s heads are being chopped off.‬

‪If you’re a colonizer and this makes you feel uncomfortable and upset. GOOD! You have NO IDEA how many comforts I want to TAKE from you. lol‬

“Becky” and “Karen” are derogatory terms for white girls.

Although his accounts were suspended from Twitter, that wasn’t before this gathered at least 1600 Likes.

Many on the Left denounced this antisemitic rant, although Kodzo reveled in the publicity he was getting and bragged about gaining lots of new followers even as he blocked his critics. Earlier today he posted support from someone who says he is a black Jew that agrees with Kodzo, although he admits he never heard of Anne Frank before yesterday.

We’ve spoken about black antisemitism before – a topic that the media intentionally downplays for fear of being labeled racist – but this is a brand of antisemitism that embraces socialism as well. And while most on the left did not agree with Kodzo, there were some who agreed on the leftist politically incorrect message boards and Twitter:

Hitler was wrong to genocide the Jews and start a world war but he wasn’t wrong about Jews being problematic. Not because they’re jews but because they’re a cabal of religious zealots like anyother.

Fuck off mossad! Try to not to headshot and pregnant Palestinian mothers today.

He’s right tho. Why is Anne Frank so shilled when there has been millions of other victims of genocide both wypipo and PoC?

Fuck, there’s shilling for the German jews but people forget the brutal genocide of the slavic peoples and Chinese civilians during that same war

You never learn about Palestinian kids cause it’s more pertinent to our current times. Jews are perpetuating the same atrocities that their ancestors faced. Their grandparents/great grandparents would be ashamed of Israel.

He’s right though. Teaching the Anne Frank bullshit is idpol in the first place. It’s better to learn your own countrie’s idpol. The Anne Frank diary shit is probably one of the worst historical accounts you can read. You can’t learn history from it. Just about little girls and their menstrual cycle’s and the boy’s they have a crush on.

If any of you foreigners wonder why American education is so bad and American don’t know any geography or history, just remember, 1 out of every 5 history lessons is a holocaust lesson for American school children.

Why is nazism so similar to judaism? Anonymous 04/27/2020 (Mon) 22:57:35
When reading a lot of nazi literature i feel like a lot of existing tenets of judaism were incorporated in christian catholic culture that underpinned nazism. The whole aryan race thing feels like a rehash of the chosen people. I guess in a way judaism is similar because it is an ethnosupremacist religion unlike the other abrahamic religions which are much more expansionist and seek to dominate via assimilation rather than direct competition. It’s no surprise today that israel funds ukranian nazis and the like. They are strikingly similar. Nazim in a way was a means to address the failings of catholicism in regards to judaism when it came to resource competition.

Exactly. The answer to Judaism is outlawing circumcision and anti-gentile bigotry and surveilling synagogues like the CCP surveills mosques and throw religious bigots in re-education camps.

i think judaism has more unique features that nazism tried to incorporate, see in jewish culture the ritualistic murder of gentiles is not only condoned but encouraged. The IDF for example exists to serve such purpose. Allowing each jew to prove his jewishness to others by killing non jews.

the IDF is a useless army, they couldn’t even liberate a small town from hezbollah in 2006. It only exists as rite of passage of jews. And as a mechanism to allow them to exert there vileness on gentiles without facing the same consequences in europe.

Some of the worst antisemitism is removed – but it exists in the leftist spaces. This is denied by the more mainstream Left but it is out there for anyone to see if they look. 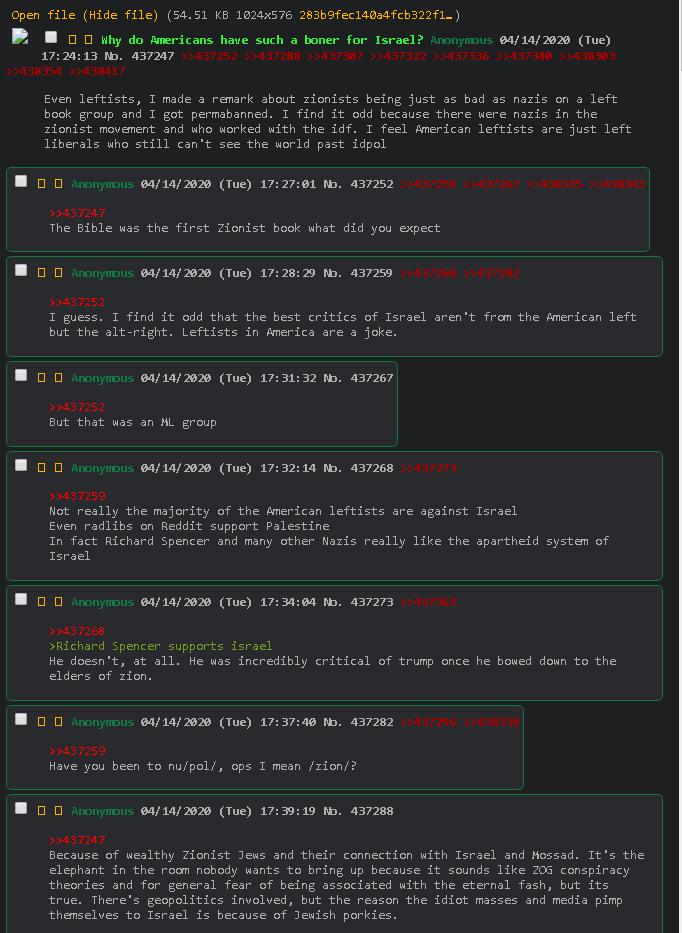 Anyone who claims that antisemitism is only a far-Right problem is willfully blind. It is a disease that affects all parts of society. And it cannot be fought by people who cannot admit that their own political allies are sometimes infected with it as well.