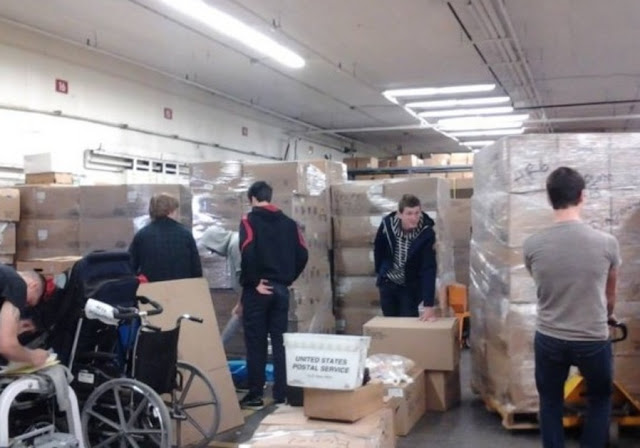 There have been plenty of articles on this site about how many NGOs use their halo of supporting human rights as a chakram to bash Israel to the point of appearing antisemitic.

But sometimes one can find an NGO that actually tries to help people – and to create peace.

Growing up in Syria, Shadi Martini was taught to stay away from Israelis: they were evil enemies seeking to kill him and his people.

Today, he works with them to help Syrians survive the devastating conflict in his country.

Earlier this month, the IDF disclosed the scope of its aid to Syrians affected by the bloodletting as part of Operation Good Neighbor, an initiative begun in June 2016 to increase civilian aid while maintaining the principle of noninvolvement in the civil war. More than 110 aid operations have been conducted since August 2016.

The IDF said it has begun working with international organizations and donors to transfer aid to more than 200,000 Syrians living close to the Israeli border.

One of these organizations is the Multifaith Alliance, an umbrella group of some 90 faith-based organizations in the United States coming together for Syrians in need. Martini is the alliance’s director of humanitarian relief and regional relations.

Martini begun his humanitarian work in 2011, as the Arab Spring was unfolding in the region and demonstrations begun in his hometown of Aleppo. At the time, he was managing a hospital there.

“We started seeing more and more people getting hurt and avoiding hospitals for fear of getting arrested,” he said. “We were seeing increased pressure from the government and security agencies who told us that if anyone comes to our facility, we have to report them and they will come to pick them up immediately.”

Martini and his team began disobeying the orders and smuggled people in and out of the facility, treating the wounded.

“They needed medical supplies and couldn’t get them, some people needed to be treated secretly,” he told The Jerusalem Post last week. “So we developed a network with friends inside Syria, and we helped people, we started smuggling things to the besieged areas.”

A year later, Martini’s operation was discovered and he had to flee Syria.

He moved to the United States, where his family had arrived earlier. Despite the danger, he continued to travel to his country, into zones where the government had no control, in order to provide aid.

“It’s a choice I had to make,” he said. “Some people chose to do nothing, just observe. I thought it was the wrong thing to do, I saw that people needed help, and regardless of who they are, if someone is suffering and injured, he should receive help.”

In 2013, Martini was approached by Israelis who wanted to send aid into Syria. He was skeptical.

“I thought maybe they were Mossad, maybe they wanted information,” he told the Post. “We were always told they are the devil, not to believe whatever they say, that they want to kill us. In a society that is not a free society, you tend not to question it. If everyone is saying that, even if it’s not true, who cares? It was part of the norm.”

But he did not want to pass on valuable aid and decided to take a chance.

He would receive the unlabeled Israeli products and distribute them into Syria. That’s when the Multifaith Alliance, which had just formed, learned about this activity, and approached him.

The organization has a three-part mission: to collect aid and raise money for organizations that help Syrian war victims, increase awareness of the crisis, and plant the seeds for stability in the region by fostering people-to-people engagement.

The alliance launched in 2013 as the Jewish Coalition for Syrian Refugees, which at that time was made up of 16 organizations and quickly scaled up to a multi-faith initiative.

With 90 organizations now involved, it collects aid in the US and ships it to Israel where the IDF now distributes it to Syrian NGOs, as part of the Good Neighbor policy.

When the Multifaith Alliance learned about existing collaborations between Syrian and Israeli NGO s, it knew that the partnerships could have important implications not just in the immediate need of delivering aid, but for long-term relations in the region.

Dr. Georgette Bennett, a daughter of Holocaust survivors who founded the alliance, told the Post, “Israel shares a border with four of the most affected countries [by the Syrian war] and therefore it makes enormous sense for Israel to be used as a staging area for the delivery of outbound international humanitarian aid, because Israel is a reliable partner, it’s got geographical proximity, it’s got tremendous expertise in search and rescue and it’s got technology that is designed to address disaster situations.”

The idea of not only helping Syrians but of also looking for long-term contacts that can facilitate peace between Israel and whatever Syria becomes is exactly what makes this organization different from so many other NGOs. Too many “human rights” groups pander to Arab antisemitism, and the idea of “normalization” with Israelis – anathema to so many Arabs – has morphed into support for boycotting the Jewish state, the modern manifestation of antisemitism that cloaks its hate as being “pro-human rights” and “supporting justice.”

Seeing an organization with real people trying to do real humanitarian work is inspiring in a world where so many so-called humanitarian groups actually work against peace.