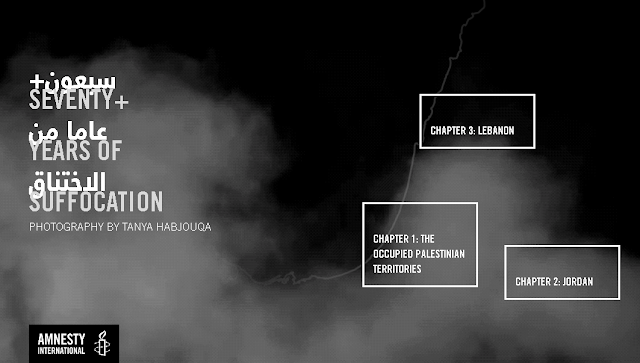 Amnesty International has created, as far as I can tell, four special websites under its Amnesty.org domain.

One of them is about Syrian prisons.

The other three are dedicated to bashing Israel – the Gaza Platform which I have extensively debunked, “Black Friday” about IDF reaction to the kidnapping of soldiers in the 2014 war, and now the latest, on “Nakba.”

Amnesty’s obsession with Israel is unabated.

The Jordan and Lebanon sections mostly accurately portray how they are mistreated in those countries, and it notes that while the majority of Jordanian Palestinians are citizens, the ones from Gaza are not and have severe restrictions. It even lightly suggests (but doesn’t demand) that they should be naturalized.

But the Lebanon section says no such thing. If Lebanon doesn’t want them to be citizens and keep them all in crowded, dirty camps forever, that’s fine.

The Gaza/West Bank section is completely different and much more extensive – but it only talks about one topic, Israel’s use of tear gas and how terrible that supposedly is. It looks like that was meant to be the main report but at the last minute Amnesty decided that tear gas isn’t really the biggest human rights issue to dedicate an entire website to so they expanded it to “Nakba”.

Yet Amnesty continues to push the false idea that the Right of Return exists. I wrote a long Twitter thread last night debunking that idea:

#UNResolution194 does NOT provide a “right to return” for a number of reasons.

First of all, it is not international law. It is a General Assembly resolution. That’s sort of basic.

Secondly, the word “right” was deliberately excluded from the resolution – because there is no such right.

If it was a “right” it would apply whether they want to live in peace with Israel or not.

And, of course, most of them are not interested in living at peace in a Jewish state, which they reject. (In fact, the Arab states rejected Resolution 194 altogether, making it ironic that they now claim that it is the basis for “return.”)

In 1950, the UN Conciliation Commission interpreted the words “to their homes” to mean their actual houses, not their “homeland.” Which implies that if the homes don’t exist anymore, then the OTHER parts of 194 should apply- the parts Amnesty ignores.

The other parts say “the Conciliation Commission [should] facilitate the repatriation, resettlement and economic and social rehabilitation of the refugees and the payment of compensation.” Meaning that according to 194, Arab states should also do their parts to resettle Pals.

Why does everyone emphasize the supposed obligations of Israel under this resolution, but ignore the obligations of the Arabs? If 194 is so sacrosanct, then ALL of it is operative, not just “return.”

Yet the Arab obligations to resettle Palestinian Arabs are never mentioned.

This selective interpretation of 194, where it is given huge importance when it supposedly gives Israel obligations but the other sections are ignored, shows that there is a political dimension to those who claim it provides a “right to return.”

Of course, 194 does not say that the descendants of 1948 refugees maintain the supposed right to return. The idea is absurd, yet @Amnesty claims that it exists. They go so far beyond the (non-binding) resolution to make themselves look like fools.

If Amnesty’s interpretation was correct, then every human being can claim the legal right to “return” to the land of any of their ancestors going back to prehistoric times. For free.

It is insane, yet this is what Amnesty is claiming.

Taking the broader picture, even if Israel was responsible for the displacement of 600,000 Palestinians in 1948, who is responsible for them being stateless and miserable for seven decades since? Shouldn’t a human rights organization try to help people, today?

The Convention on the Rights of the Child states “The child shall be registered immediately after birth and shall have the right from birth to a name, the right to acquire a nationality….”

Why doesn’t Amnesty insist that Pals born in Arab countries be citizens? Isn’t that what human rights organizations are supposed to do? Try to end statelessness and provide protection for children when they are born?

Yet Amnesty and @HRW have an “Israeli exception” to this idea, as with so many other human rights concepts.

Similarly, the UN Human Rights Commission says “States shall introduce safeguards to prevent statelessness by granting their nationality to persons who would otherwise be stateless and are …born in their territory…”

For some reason, no NGO tells Arabs to do this.

So we have an incredible irony here: Human rights NGOs, and the UN Human Rights Commission, are actively working AGAINST providing basic human rights to Palestinians who have been in Arab countries since 1948.

All while pretending that they support Palestinians.

There was never a poll done of Palestinian Arabs asking if they would like to become citizens of their host countries in the Arab world (including Gulf states.) They were never given a choice. Their self declared leaders, and the Arab leaders, insisted they would prefer not.

This was a cynical attempt to use them as pawns to hurt Israel. They insisted on “return” – the Palestinian leaders to sound strong, the Arab leaders to get rid of them.

The UN, Amnesty and HRW are going along with this cynical plan from the 1950s and insisting that Palestinians remain in stateless limbo forever, or until Israel agrees to commit suicide.

By not using their influence to pressure Arab countries, they are complicit in Pal misery.

The lack of insistence by NGOs on Arab nations finally taking on the responsibility for their Palestinian refugees – which every nation does, which even Arabs did for Syrian and Iraqi refugees – damns them. They cannot credibly claim to care about human rights.

There is no reason that a population should be considered, and treated as, “refugees” for 71 years. If return isn’t an option – and it isn’t, unless Israel wants to commit suicide – any real human rights NGO would go to plan B, or plan C.

Instead they parrot 1950s Arab leaders. the ones who admitted that they were using the refugees in order to eventually destroy Israel.

Amnesty’s “Nakba” website is only the latest example of using the language of human rights to LIMIT the human rights of Palestinians to be citizens of their host countries.