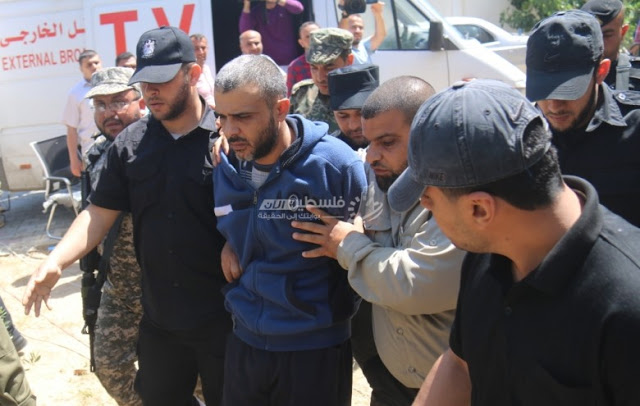 In April, Hamas executed three men for supposedly being “collaborators” with Israel.

Amnesty International condemned this, but only after the fact. As far as I can tell, Human Rights Watch remained silent.

Now Amnesty has advance notice that Hamas plans to execute three more men tomorrow for allegedly being involved in the assassination of a Hamas leader Mazen Fukaha last March. They were sentenced to death only on Sunday.

It is scheduled for 5 PM on Thursday. Two men will be hanged and a third shot by firing squad. Hamas’ Interior Ministry announced this, saying that there is no reason to wait, as the “public” is insisting on the executions..

Hamas’ announcement said that the executions would be witnessed by “official human rights bodies, community notables and mayors.”

I have not seen a word about this on the Amnesty or HRW websites or Twitter feeds. Nor have I ever seen a word from them about how Hamas pretends that executions are compatible with their “human rights” groups.

One would think that the most prominent players in international human rights would be appalled at this.

Will Amnesty or Human Rights Watch jump into action to pressure Hamas before the killings – or will they wait and only act upset afterwards? Will they email and tweet their tens of thousands of supporters to flood Palestinian and Hamas agencies and social media to act against the executions? Is this an emergency for them, or will Amnesty only issue a statement of fake outrage afterwards? They know the value of an intense public campaign – will they issue any press releases today?

Let’s see what they do for three people whose lives are scheduled to be ended, with advanced notice.