The main Jewish cemetery in Aden  – a British colony until 1967 – has been razed to make way for urban development, in violation of western and Islamic values. The news was relayed by Dr Edy Cohen in BESA Center News. 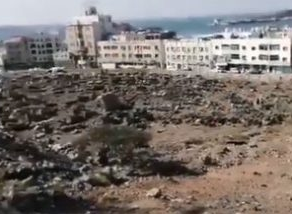 The current desecration of the cemetery in Aden is being done in the service of a huge construction project in a much-sought-after neighborhood in the city, not far from the sea. (Click here to watch a video clip.)

The buildings are to be erected on top of the ruins of the cemetery. This is contrary not only to the accepted values ​​and ethics of the Western world, but to Islamic values ​​and Muslim law as well.

This does not appear to be a limiting factor in the minds of the “Transitional Council” in Yemen, established in 2017 under the leadership of Gen. Aidarus Zubeidi.

The Council views its control over Aden as a springboard for the establishment of an independent state in southern Yemen, and it does not intend to be thwarted by ethical or religious reservations.

The construction project will bring about the final erasure of the last remnants of the Jewish community in Aden, whose roots are considerably older than Islam itself.