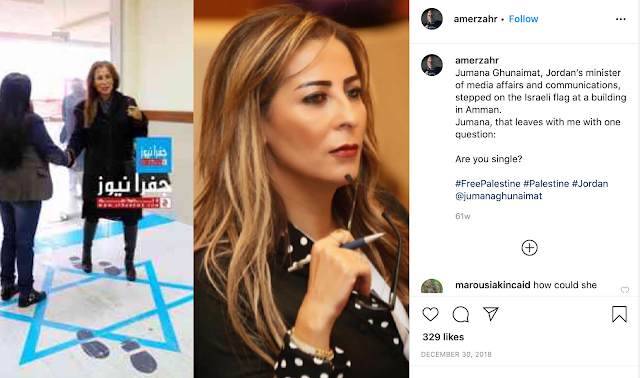 It’s worthwhile to look at one more version Amer Zahr offers for the “refugee” story of his father. In a post written in May of last year under the title “DON’T MESS WITH PALESTINIANS!”, Zahr pondered the Palestinian “nakba”, i.e. catastrophe, and presented his father as an example for his claim that “this whole Nakba-Naksa-Youm El Ard stuff has actually made us [i.e. Palestinians] stronger.” According to Zahr, Palestinians are now “the hardest working people in the world” and “the smartest people in the world”:
“To illustrate all these points, I’d like to tell you of the case of a particular refugee I know quite well. His name is George Zahr. He was born in Yafa, Palestine in March 1948. At one month old, he became a refugee. He grew up in Jordan, starting his education in UNRWA schools. Then, he finished high school with honors, college with honors, master’s degree with honors, and a doctorate degree in chemistry with honors. As you can see, there’s a theme.
His education got him a professorship, then a well-paying research position in America for thirty-five years. A big house. Nice cars. College-educated kids. That’s the Palestinian story. From nothing to everything.
Education catapulted my dad from a shoeless Palestinian refugee to a spoiled American who owns a triple-control, seven-jet, multi-functional, Bluetooth-enabled, state-of-the-art, voice-activated shower. I love this country.
And it all happened because Israel tried to get rid of him.”
It’s nice to hear that Amer Zahr loves America – which you wouldn’t always know from his social media posts. And it’s of course very nice to hear that his father was so successful in pursuing the American dream. But it didn’t “all happened because Israel tried to get rid of him”: Zahr’s father was born before Israel was established, and his parents fled the preparations for “a war of extermination” that Arab leaders and governments threatened and incited in order to prevent Israel’s re-establishment.
Reading Zahr’s “nakba” post from last year illustrates not only his usual disregard for facts and his seething hatred for Israel, but it also reveals his almost pathological Palestinian nationalism. This is how he concludes his post:
“Remember how I said Israel created 800,000 Palestinian refugees in 1948? Well, that was true. But they didn’t get everyone. About 150,000 Palestinians remained in what is today Israel. Now, if those 150,000 people had increased at the average global population growth rate, today they should number about 350,000-400,000 people. But they’re not 350,000-400,000 people. Nope. They’re 1.8 million people. That’s right, they drop bombs, we drop babies. They have tanks and helicopters, but we have the strongest weapon in the world.
And that population spike is not our fault. When you shut down the roads, deprive us jobs, and confine us to ghettos, there’s a lot of free time to fill. And don’t forget, two thousand years ago, we got a woman pregnant without touching her. What did you think was gonna happen when we started touching each other?
So, I guess my message is this. Don’t push us. Don’t challenge us. We end up as multilingual, super-educated, hyper-reproductive, overachieving marvels.
That’s right. Don’t mess with us Palestinians. If you do, we will outwork you, we will outsmart you, and we will, if necessary, outfuck you too.”
Perhaps Zahr feels he can write like this because people will keep in mind that he’s a comedian and be inclined not to take him too seriously. But when he boasts that “two thousand years ago, we [Palestinians] got a woman pregnant without touching her,” he picks up a recurring theme of his activism that should be taken seriously, because it echoes the long and bloody history of Christian antisemitism.
It’s unclear if Zahr identifies as a Christian because his father was born to Christian parents. Zahr’s mother is Muslim, and it seems that Zahr sometimes performs at events where organizers probably assume that he is Muslim. Most likely, Zahr views religion like he views facts: as something that can be twisted, or ignored altogether, depending on what’s more convenient.
But Zahr’s efforts to use Christianity in order to promote an antisemitic message are quite serious and sustained. At the time of this writing, Zahr’s pinned tweet is from December 2018 and announces: “Merry PALESTINIAN Christmas! Jesus was one of us! Palestine is full of history. Could you be named after a Palestinian? #MerryChristmas #Palestine #FreePalestine #Jesus #JesusIsPalestinian” 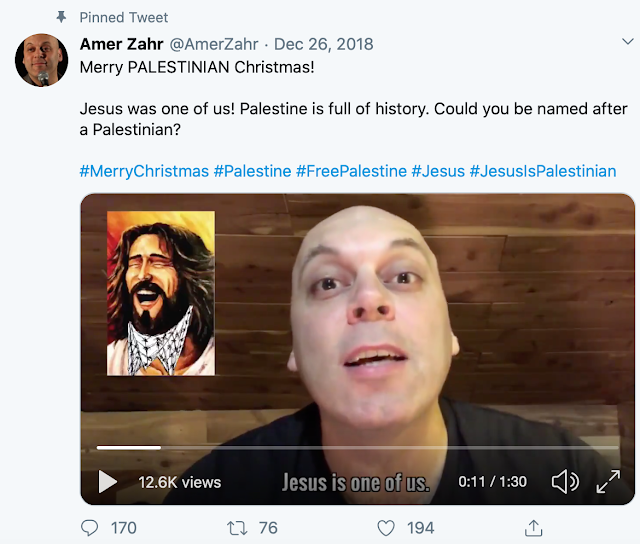 The clip featured in the tweet is downright idiotic and leaves you wondering if Amer Zahr is perhaps not particularly bright, or if he just thinks his followers are hopelessly dim.
Zahr starts out claiming that celebrating Christmas means “celebrating the birth of a Palestinian.” He goes on to list figures from the New Testament, including Mary, the mother of Jesus, and tells his viewers that anyone sharing any of the names of these New Testament figures is named after a Palestinian.
It gets even more ridiculous when Zahr asserts: “Jesus fought against occupation and tyranny” – but if that’s what you believe, it’s obvious that Jesus would have fought against the Roman occupation of his ancestral Jewish homeland. When the Romans executed Jesus, they mocked him as “King of the Jews”; and it was of course the Romans who eventually “exiled the majority of the Jewish people and renamed Judea ‘Palestina’. To be clear, ‘Syria Palestine’ officially became a Roman province about a century after Jesus’ crucifixion. The idea was to erase the Jewish presence from Judea and to designate their homeland with reference to their Biblical enemies”,  i.e. the Aegean people (from what is now Greece) called “Philistines”/ “Plishtim.” The “Philistines” had disappeared centuries earlier, but the Roman renaming of the Jewish homeland was obviously intended as “a last humiliation.”
The Jew-haters of today may enjoy it when people like Zahr try to re-enact the Roman humiliation of the Jews, and Zahr is only too happy to promote antisemitic Palestinian propaganda by abusing Christian holidays for his “Jesus was a Palestinian” nonsense. 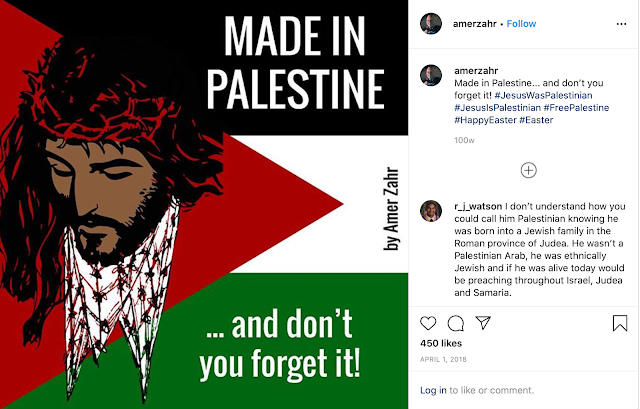 But while the kind of Palestinian propaganda promoted by Zahr might seem ridiculous, it shouldn’t be ignored that it reflects the roots of Christian antisemitism. As the eminent scholar Walter Russell Mead has emphasized, some of the writings in the Christian New Testament illustrate that it was considered “extremely important that Jesus was a Jew and that the story of Jesus is part of the story of God’s encounter with the Jewish people.” However, “Christians going back to the first century AD have often wished this wasn’t so. In ancient times, various Greek and Roman cults grew up that detached the figure of Jesus from this Jewish context […] More recently, the Nazis in particular hated the idea of Jesus being a Jew, and some of them went so far as to invent an “Aryan Christianity” with an Aryan Christ. The Nazis were picking up on a kind of anti-Semitism that flourished in the first and second centuries after Christ as theological writers like Marcion argued that the Jewish God of the Old Testament had nothing to do with the much higher, more noble, and philosophically acceptable deity proclaimed by Jesus.”
One of the links Mead provides leads to a book on “The Aryan Jesus: Christian Theologians and the Bible in Nazi Germany,” which seems sadly relevant for Palestinian efforts to “dejudaize” Jesus. Here is the introductory paragraph: 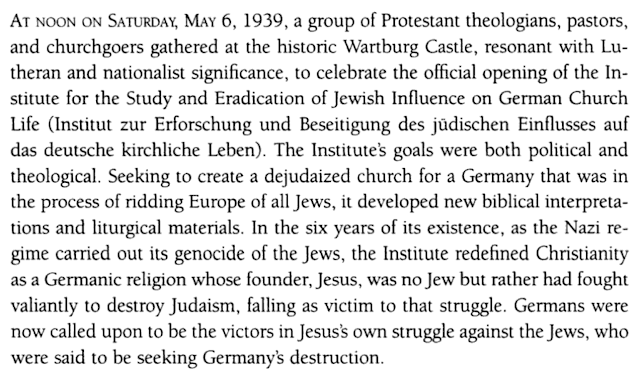 The Palestinian need to deny that Jesus was a Jew is of course rooted in the refusal to acknowledge that the Jews are indigenous to today’s Israel and the historic areas of Judea and Samaria; needless to say, this also includes the denial of the fact that Jerusalem became a holy city for Christians and Muslims because the Temple Mount had first been – and remains – Judaism’s holiest site.
Putative “progressives” like Bernie Sanders surrogate Amer Zahr would never even dream of denying the history of indigenous people anywhere – except for the Jews. Zahr may be a comedian, but there’s nothing funny about the endless lies and fabrications he comes up with in order to demonize the world’s only Jewish state.