Many years ago, Dry Bones published this cartoon: 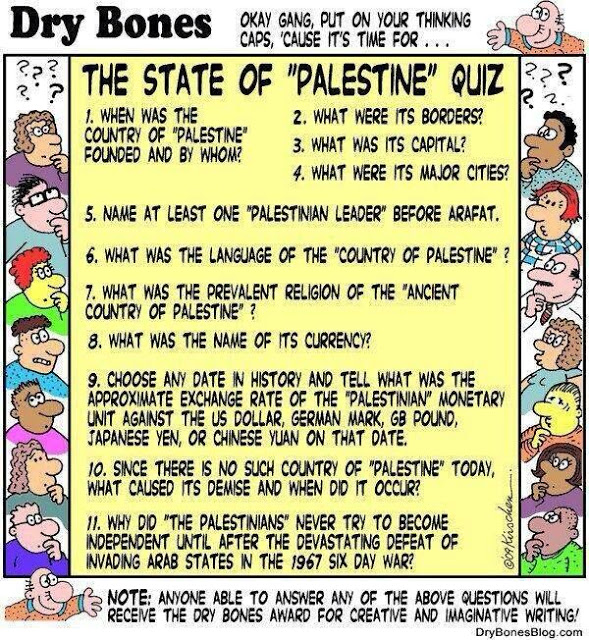 Nada Elia at Middle East Eye claims to demolish this argument – and fails spectacularly.
She believes that the questions themselves are illegitimate to begin with, but pretends to show that they make no sense even within its own context. She does this by purposefully misunderstanding English.

The questions in the cartoon reveal a surprisingly shallow knowledge of history, plagued by utter disrespect for chronology and logic. I particularly like #9, which asks us to choose “any date in history” and give the exchange rate of the “Palestinian currency against the US dollar”.
What if I chose a date before 1792, when the US dollar was first created?  But let’s not go so far back in history – the Deutsche Mark itself did not come into existence until 1948.
And if picking a date in history and comparing one country’s currency rate to another’s is proof that the country has historical legitimacy, what if I chose the year 1937, and asked how the Israeli currency compared to the Japanese Yen then? And if I came up blank, would that mean that neither country can lay claim to historical existence?

Obviously there is a United States and a Japan and a Germany, and currencies are one way of showing nationhood. The Palestinian Arabs cannot point to any date in history that they had one.

This is obvious and Elia’s attempt to misunderstand what the cartoon is saying shows her dishonesty.

But this isn’t her main point. After quoting Zionist figures in history to prove that they were colonialist (as if they didn’t also speak passionately about rebuilding Judah and Israel of old) she makes her only real point, which proves the exact opposite of what she intends:


The Zionist logic, that we did not exist because we did not have a currency, national boundaries, etc, would also deny that Native Americans existed, because they did not have nation states recognisable to the Europeans. And indeed, that is how the colonisation of the Americas happened – violently, and hinging on genocide, but above all, grounded in racism.

No one denies that Native Americans exist and existed. And no one denies that they were a set of tribes. However, no one could call them a nation. While the Incas and the Aztecs had vast empires, Native North Americans never reached that level.  So, while the Incas and Aztecs could not answer all of the Dry Bones questions, they could answer enough of them to show that they were nations – they had leaders, borders, their own languages; they had a central government, they controlled territory.

The Palestinian Arabs had none of those things. None of the questions can be answered.

And Elia never tries to say what her concept of a nation is that can be twisted to allow the Palestinians to be called one. She spends her entire essay trying to prove that those who say Palestine was never a nation are wrong or Eurocentric in their logic, but she cannot come up with a single example that would put Palestinians on par with, say, the Abbasids who had a flourishing culture or the Rasulids who controlled Yemen and issued currency in the 13th century. Even in Eurocentric thinking, those Middle Eastern dynasties had the features of nationhood.

The truth is, the Palestinian Arabs weren’t a nation or even a people by any definition, European or Middle Eastern. And she knows she cannot prove their peoplehood so she obfuscates the truth and fails at answering the main argument – of a cartoonist.