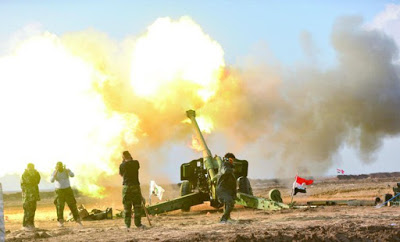 
A notorious sectarian leader in Iraq has claimed that the Shiite project of encircling and dominating the Middle Eastern states is on track.
Delivering a speech in Arabic, at a graduation ceremony of Shiite clerics in Iraq on Thursday, Asaib Ahl Al-Haq militia commander Qais Al-Khazali said: “The reappearance of Imam Mahdi will mark the completion of the Shiite project. Iranian Revolutionary Guards, Hezbollah in Lebanon, Asaib Ahl Al-Haq and the Houthis are working hard to make the ground fertile for Imam Mahdi.”
Al-Khazali was referring to the Shiite belief that Imam Mahdi — the 12th and last Shiite imam who disappeared in the 9th century — will one day appear in order to bring justice to earth.
Asaib Ahl Al-Haq, which Al-Khazali leads, is one of the most violent Shiite militias in Iraq. It is aided and abetted by Iran. Al-Khazali reportedly said: “We’ll continue to work toward our project of a Shiite full moon, not a Shiite crescent as our enemies say.”
The phrase “Shiite crescent” was first coined by King Abdallah of Jordan 10 years ago. At that time, he meant Iranian control over Lebanon via Hezbollah, Syria via the Bashar Assad regime, and Iraq through the new Iran-allied government in Baghdad. Al-Khazali is now talking of a “Shiite full moon.”

The topic of Iran’s goal of regional dominance is rarely addressed in the media. Ironically, the Muslims accuse Israel of aspiring to regional dominance, when in fact that role has gone to Iran, Egypt, Syria, Turkey, Jordan and Saudi Arabia over the past century – but never Israel.

This is the main reason why Arabs are so alarmed by Iran today. They know that between Iran and Israel, only Iran truly aspires to take over the region while Israel wants to make allies with existing states but not dominate them.