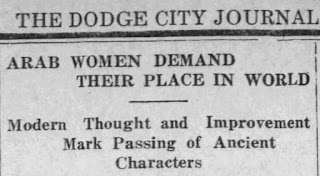 We know from recent surveys that Palestinians, for all they hate about Israel, they admire it as a strong democracy. 68% of Palestinians describe Israeli democracy as good or very good.
This sort of influence is indirect, but important. The Palestinians might not be implementing real democracy, but they know that they are falling short.
A similar effect was reported in Palestine in 1920, as the Arab women saw that the Jewish Assembly of Representatives held elections – the first free elections ever held in Palestine – and Jewish women could not only vote, but they could run for office as well. And this caused the Arab women to think about equality.
I found this article in a number of newspapers; this specific one is from the Dodge City Journal for July 8, 1920.
It is bigoted against Arabs, but it points to something that is rarely studied: the psychological effects of a liberal Jewish population on the Arabs in Palestine.

ARAB WOMEN DEMAND THEIR PLACE IN WORLD
Newspaper accounts some time ago prophesied the gradual disappearance from Palestine of the picturesque water vendor, for thousands of years a familiar characteristic of the landscape of the Holy Land. The reasons advanced for the elimination of this graceful Arab woman, who glides along-with an earthen jug balanced so carelessly on her veiled head, were that improvements made in the water supply systems in Palestine, particularly in Jerusalem by the Bristish army engineers and the Zionist Commission, together with future improvements planned in the Zionist reconstruction of the Holy Land would give the water vendor nothing to sell.
But something else has happened in the meantime, which has hastened the disappearance of this typical Eastern figure. For the water vendor has not waited for modern improvements to force her to seek other fields for earning a living. Together with other Arab women of a Palestine, she’s beginning to object to carrying a heavy earthen jug of water around on hot streets, at the same time that others of her sex are  refusing to serve as oxen in the fields or as other beasts of burden for their husbands, a role they have faithfully enacted for these many thousands of years.
For while furnishing the motive power for husband’s plow or trudging to market with his sack of grain on her shoulders the Arab woman has learned something this spring, which caused her to stop and think, something the customs of the race haven’t permitted her in some time.
She made the almost unbelievable discovery that Jewish women had been granted equal right in the government of Jewish Palestine, that not only were women given the right to vote for representatives to an elected assembly, which was to provide laws for the government of the Jewish communities of the land, but that these very same women could be candidates for representatives, and if elected, sit in the assembly chambers with the same power and rights as the men.
And then to impress this equality of sex further upon the minds of the long timorous and plodding Arab women, five Jewesses were chosen members of the first popular assembly in Palestine in the first popular elections ever held in the country. Whereupon, according to reports received in this country, Arab women, took stock of themselves and, breaking away from traditions and customs which have made them slaves  of the basest sort, they proceeded  to lay down the law to their husbands, much to the latter’s surprise and discomfort. For wives being much cheaper for the Arabs of Palestine than horses and oxen, they looked at marriage purely from. the economic point of view.
Dr. Rosa Straus, long prominent in philanthropic work in New York, is in Palestine for over a year where she has been engaged in various communal enterprises for the uplift of women, reports that “many an Arab  wife is refusing to put up with the treatment which for centuries the custom has decreed for the women of that race.” They are courageously defying their husbands. and the custom behind which their husbands have lived a comparatively restful life, and are now striving to improve  their conditions, according to Dr. Strauss.
Equality for all sexes, races and religions is one of the basic principles of the Zionist program in then National Homeland in Palestine. For a long while the extreme orthodox group held out flatly against granting women full suffrage, but the women Zionists finally prevailed and the first popular election ever held in the Holy Land found women voting and campaigning as spiritedly as the men and just as successfully for they elected five representatives.
Arabs who have been voicing opposition to Zionism, because the new Jewish National Homeland will bring enlightenment, progress and prosperty to all the peoples of the land, have another grievance against the Zionists now, because the equal suffrage movement in Palestine will lose them their absolute czardom over the home. and worse yet, according to their way of thinking, transportation power for their ploughs and crops.
An equal rights association in Palestine already has branches in Jerusalem„Jaffa, Haifa and Tiberias, although members so far include mostly Jewish women. Arab women will soon flock to them in great numbers, it is predicted, as the suffrage movement is progressing steadily throughout the land. Another chase of the Zionist work which will influence the gradual emancipation of Arab women is the fact that the Jewish women engaged in agricultural colonization and in other work toward the reclaiming of the lost industrial and commercial life of the Holy Land are practically all from well educated families in Eastern Europe. They engage actively in the pioneer work of restoring the ancient land on the same basis as the men, an example which which too has made a deep impression on the Arabs. Zionist schools, too, together with the University of Jerusalem, all of which will give Arabs their first real chance at an education, will help in raising the Arab women to the standards customs have kept from her for so many hundreds of years.