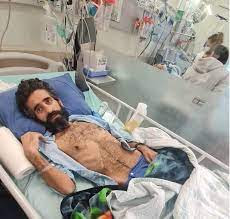 The media is filled with stories about  Hisham Abu Hawash, the Palestinian hunger striker who is reportedly near death as he insists to be released from administrative detention.
Arab members of Knesset are visiting him. Rashida Tlaib is calling for his release. Islamic Jihad is threatening war if he dies.
Nobody is talking about his record, though.
While the reasons for his current detention have not been released, he has a long track record of terror – and the media is not reporting about his past attacks, which certainly have relevance today. He is no innocent lamb. His current detention is to stop a planned attack, but the details are confidential.
Israel’s Channel 14 did the research.
In 2002 he assisted other terrorists by spying on IDF movements and letting them know the details. He also helped find hiding spots for another terrorist.
In 2004, he obtained a rifle and hid it until a planned attack. The attack came later in 2004 as he tried to fire on IDF jeeps, but his gun malfunctioned and he was caught. He received a 56 month prison sentence for that.
One can assume that after his prison stint, he has remained active in Islamic Jihad and has been rising through its ranks. 39 year-olds are senior operatives. If Israel says he was planning a major attack, it doesn’t seem like they just made that up.
(h/t Tomer Ilan)