In the Australian Senate on Thursday, a bizarre-looking, frankly scary, figure with the look of a big black crow sits in the chamber, having been let in with scarcely a concern for security.

An assurance from an acquaintance  that the figure draped in what resembles a garbage bag was who she purported to be was enough to allow the figure to slip in, with no demand that she reveal her face.

The figure was, it soon transpired, indeed the controversial Senator Pauline Hanson, whose wrapping herself in a burqa stunt was performed in order to demonstrate just how lax security in the Australian Parliament is, and to request of Attorney-General George Brandis during Question Time an assurance that, given the terror threat, wearing the burqa be banned in public places in Australia.

As seen on video, George Brandis was not amused by Ms Hanson’s stunt and unmoved by her request.  Not that Brandis was unmoved, mark you: his voice trembled and tears bid fair to trickle down his cheeks as he berated Ms Hanson for offending Muslims.

Not a word passed his lips about the offence the grotesque garment called the burqa gives to womankind.


‘First, Brandis — and Senators of the Left — savaged Hanson for wearing a burqa, but many voters would know these same MPs would have applauded the “courage” of a Muslim MP wearing that alienating sack.

Second, Brandis dangerously elevated the burqa as an important symbol of Islam — a “religious garment”.

Labor’s Penny Wong was as bad, praising the wearing of the burqa as a “sincere act of faith”.

Apologists used to claim the burqa was just a backward tribal thing that did not represent nice and sweet Islam at all. But now it apparently does.

Third, Brandis, voice cracking with emotion, then got to the heart of his problem with Hanson’s burqa, and this is not just troubling but alarming.

“It has been the advice of each Director-General of security … and each Commissioner of the Australian Federal Police with whom I have worked that it is vital for their intelligence and law enforcement work that they work cooperatively with the Muslim community,” he blustered.

“To ridicule that community, to drive it into a corner, to mock its religious garments is an appalling thing to do.”

Let me translate: do not mock or criticise the burqa or more Muslims will attack us.

Sorry, but I don’t want us cowed by such threats. The burqa is an abomination, and no threats should stop me from asserting this feminist truth.

Does anyone tell gay activists to stop dressing up as nuns or Christians may blow us up?

What Brandis has in fact said is that Muslims are dangerous, and the burqa represents them.

I hope Brandis is just exaggerating the extremism of most Muslims.

But I certainly know he’s kowtowing to a radical minority who want their women bagged and hidden from view.

Sure is.  But I’d make an additional point regarding these politicians’ motives; they’re out to catch Muslim votes, and (as with these pro-Islam wets representing the churches) if women’s rights, welfare and dignity have to be sacrificed in order to achieve that aim, then so be it.

Leftist hypocrisy regarding feminism and Islam can be clearly seen in many of the comments on Bolt’s article.

One earnest leftist tells those who agree with Pauline Hanson on this issue that they belong in Victorian Britain.  O, how laughable (that is, if it were not so very sad!) A male apologist for that misogynistic oppressive garment the burqa telling those who oppose it that they (and not he) belong in a time and place where women (like females under Sharia today) were in subjugation to patriarchal tyranny!

Inevitably, among the champions of burqa-wearing was Greens leader Richard Di Natale, that weaselly foe of Israel, pictured below (front centre) with some buddies. 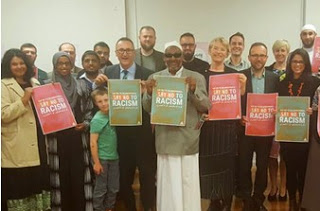 As a doctor of medicine, Di Natale cannot be ignorant of the danger to unborn babies the wearing by pregnant women of a garment that blocks out sunshine poses: he has obviously heard of rickets and its causes.  I suppose he’s happy with the advice that burqa-clad women compensate by dosing themselves with milk fortified with Vitamin D.

But what about the deleterious effect on women’s comfort and eyesight that accompanies being encased in a stifling sack and forced to peer at the world through a grill made of mesh.

Perhaps Senator Hanson should borrow somebody’s Fluffy or Fido next time, put its head in a burqa, and watch the reaction of senators to that.

I’ll wager that they’ll label as cruelty to animals (and rightly so) the cruelty they are content to have women endure.

(Unless, in the case of Fido, they recall something about Muslims considering dogs unclean, of course.)