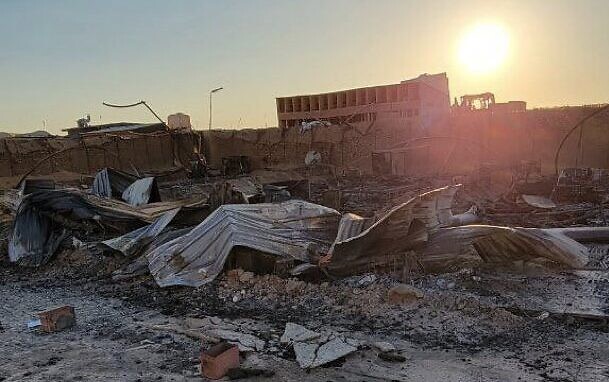 An armed drone strike last month on an American military base in southern Syria was Iranian retaliation for Israeli airstrikes in Syria, according to eight American and Israeli officials who spoke on the condition of anonymity to discuss intelligence matters.
The drone attack, which caused no casualties, would be the first time Iran has directed a military strike against the United States in response to an attack by Israel, an escalation of Iran’s shadow war with Israel that poses new dangers to U.S. forces in the Middle East.
Five so-called suicide drones were launched at the American base at Al Tanf on Oct. 20 in what the U.S. Central Command called a “deliberate and coordinated” attack. Only two detonated on impact, but they were loaded with ball bearings and shrapnel with a “clear intent to kill,” a senior U.S. military official said.
Most of the 200 American troops stationed at the base, whose main role is training Syrian militias to fight the Islamic State, had been evacuated hours earlier after being tipped off by Israeli intelligence, the officials said.
Both Israeli and U.S. intelligence officials said they had intelligence indicating that Iran was behind the operation. Because three of the drones did not explode, American officials were able to study them and determine that they employed the same technology as drones used by Iran-backed militias in Iraq.

Israel attacks Iranian targets in Syria, and Iran retaliates against – the United States.
Why?
Perhaps it is because Iran considers the US and Israel to be essentially the same. But they are far more sophisticated than that.
This is an attempt to drive a wedge between Israel and the US.
Iran sees the public debate in the US over support for Israel. While the media exaggerates it a great deal, that isn’t important; the perception is. If Iran starts to harass US troops and American targets, while making it clear that this is about Israel, there will be some Americans who say that supporting Israel isn’t worth the risk to American lives.
Of course, Iran cannot do this directly, so it has to do it without taking credit but in such a way that it is unmistakable.
This was the wildly successful Palestinian strategy in the 1970s. They directed their terror attacks primarily against Western targets, particularly airplane hijackings and attacks in airports. The terrorists made it clear that if the West would give up its support for Israel, the attacks would stop. George Habash, the PFLP head,  said, “To kill a Jew far from the battlefield has more effect than killing a 100 of them in battle; it attracts more attention. And when we set fire to a store in London those few flames are worth the burning down of two kibbutzim. Because we force people to ask what is going on.”
PFLP mastermind of airplane hijackings, Wadi Haddad, said, “We must be a constant irritation, a bug under the skin of the developed world. We must make them lose patience with Israel and Palestine that hard way.”
Yasir Arafat responded to the PFLP by creating Black September to be able to reap the benefits of attacking Western targets while maintaining deniability as to being directly responsible, so he could pretend to want peace.
After only a couple of years of these attacks, the world rewarded Arafat with a speech at the UN. This happened in 1974, in the midst of the Palestinian international terror spree – two years after the Munich Olympics massacre, two years before the Entebbe hijacking, with many other major attacks both within and outside Israel never stopping.
The West rewarded Arafat’s terror by legitimizing him and turning away from Israel while pretending to do this for moral reasons. This culminated in the infamous UN “Zionism is Racism” resolution, a complete capitulation to Palestinian terror by the international community.
Iran is now mimicking the PLO’s strategy – be a thorn on the side of the Americans and make it seem as if this will end when the US abandons Israel. Do it in such a way that the US does not have enough clear cut evidence and Congressional backing to directly retaliate against Iran.
Meanwhile this is an appeal to American opinion that supporting Israel is not worth the cost. And, just as it happened in the 1970s, the people who are most likely to buckle under to  this blackmail are the ones who will loudly proclaim that they are doing it not because they are cowards but because they truly believe in the justice of the anti-Israel cause.
———–
An excellent account of the Palestinian hijacking attacks from the 1960s to early 80s can be found in an appendix of Terrorist Innovations in Weapons of Mass Effect Preconditions, Causes, and Predictive Indicators, page 86-98. A much shorter article, The 1967 War and the birth of international terrorism  summarizes this as well.