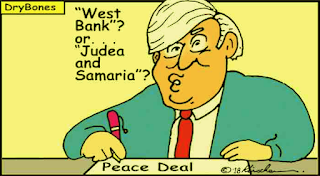 President Trump – having rejected a barrage of criticism since describing himself as a “nationalist” – faces a further torrent of invective should he choose to say “Judea and Samaria” rather than “West Bank” in his soon to-be-released peace proposals.

Arab propaganda has used “West Bank” since 1949 to obliterate any Jewish connection to one of the two remaining pieces of land under the League of Nations Mandate for Palestine where sovereignty still remains undetermined between Jews and Arabs. Even worse, the United Nations and the US State Department have continued using this deceptive and misleading terminology since 1967.

The media and countless political commentators have sought to relegate the historical-geographical term “Judea and Samaria” to some ancient biblical anachronism that fell into disuse centuries ago – yet that term appears in the 1911 Encyclopaedia Britannica and the UN 1947 Partition Plan resolution.

Incontrovertible Jewish claims to this hotly-disputed territory – about the size of Delaware – were eloquently summarised in the Forward on 12 July 1991:


‘As for “Judea” and “Samaria”, they are indeed ancient names, but the notion that they had become “archaic” prior to 1967 is totally false for both English and Hebrew. Indeed, unlike their Moslem counterparts, not only Jewish, but Christian geographers too, from Roman times onward, always considered the mountainous regions north and south of Jerusalem to be discrete entities, since this is how the Old and New Testaments speak of them because of the separate Judean and Israelite kingdoms that existed there. As late as many 18th-, 19th- and early 20th-century atlases, it is possible to find accurate maps of Palestine with the major Arab towns and villages appearing beside the words “Judea” and “Samaria” in large print.

The Hebrew terms, yehuda and shomron have had a slightly more complex history – rather, shomron has had, since yehuda, “Judah” which was originally the name of the tribe that occupied the southern hill country of the Land of Israel, has been in uninterrupted use as a geographical term since the Book of Deuteronomy. We find it and it alone in the Mishnah and the Talmud; in the account of the famous 12th-century Jewish traveller Benjamin of Tudela; in Kaftor u-Ferach, a 16th-century halakhic geography of Palestine composed by the Italian Rabbi Ishtori Haparhi; in all the 19t- and 20th-century literature of Zionist settlement in Palestine; and in thousands of other Hebrew sources from every period of Jewish history as well.

The case of “shomron”, “Samaria”, is somewhat different. The oldest Hebrew name for the mountains north of Jerusalem is not shomron but efrayim, after the tribe whose territory it was. Shomron was originally a site in Efrayim that, in the reign of King Omri, became the capital of the northern Kingdom of Israel, which eventually began to bear its name. Thus, in the Hebrew Bible we find shomron, efrayim, and yisra’el used interchangeably, while in rabbinic literature they are joined by a fourth term: eretz ha-kutim, “the Land of the Cuthites” – a reference to the Samaritans, a population originally transferred from the Babylonian region of Kutu to take the place of the “ten lost” tribes of Israel deported by the Assyrians in 721 B.C.E.

Subsequently, all four of these terms were used by Jewish sources, although the last two dropped out in the Middle Ages; it was not however, until the conquest of the area in 1967 that “Shomron” was finally recognized instead of “Efrayim”.’

President Trump should use “Judea and Samaria” to end 70 years of fraudulent Arab propaganda – aided and abetted by the United Nations, the US State Department and the President’s oft designated “fake news’’.

(Author’s note: The cartoon – commissioned exclusively for this article—is by Yaakov Kirschen aka “Dry Bones”- one of Israel’s foremost political and social commentators – whose cartoons have graced the columns of Israeli and international media publications for decades. His cartoons can be viewed at Drybonesblog)