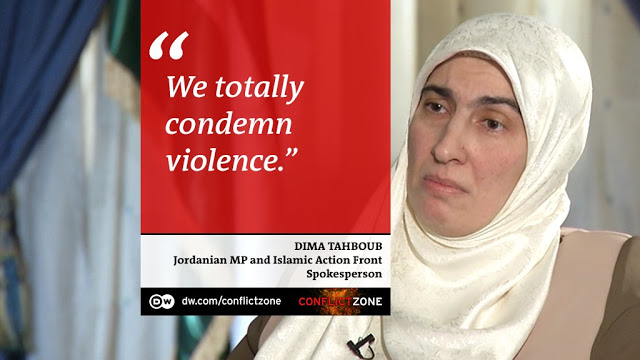 Here is an excerpt from an interview with Muslim Brotherhood supporter and member of the Jordanian parliament, Dima Tahboub.

At the very same time that she claims to be against violence, she justifies and cheers the murder of 7 Israeli schoolgirls in 1997 in the Island of Peace massacre.

Dima Tahboub is not the reason peace is impossible in the Middle East. She’s a hater, a bigot, an antisemite, a Muslim supremacist and an inciter, but there are lots of those around.

The reason that peace is impossible is because it is impossible to find any Arabs, anywhere in region, who are aghast at these comments and willing to publicly stand up and condemn them.

If one cannot find a a single Arab government, a single Arab “human rights’ organization, a single Arab lawmaker or a single Arab pundit or columnist willing to condemn Tahboub for cheering the murder of innocent girls because they are Jewish, then that silence tells us far more about how the Arab world thinks than a thousand statements that they are against violence and don’t hate Jews.

I have no doubt that many Arabs do not support the wanton murder of innocent girls, even Jewish ones. But even those Arabs live in a society where they both do not feel strongly enough about it to speak up, and where if they did there would be very unpleasant consequences for them and their families. Such a society is not capable of making real peace, ever.

The full disgusting interview is here.