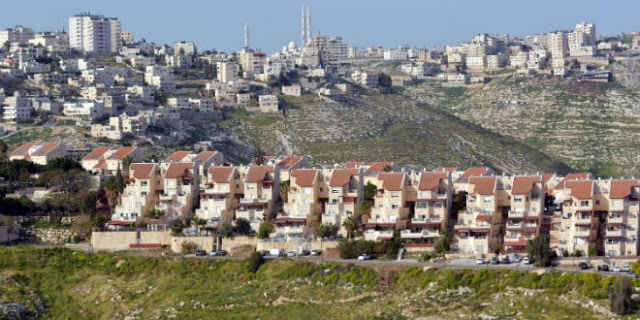 A few days ago, many liberal Jewish groups sent a letter to President Trump asking him to act against any Israeli annexation of land in Judea and Samaria.

Some of the arguments are based on the idea that Netanyahu will annex the entire territory, which is clearly not going to happen which makes it a straw man argument. The demographic threat of annexing the entire territory is real – but if Israel only annexes the settlement blocs near the Green Line, which is a far more likely scenario, there is no demographic threat.

The letter says “We strongly urge you to pledge that any peace initiative your administration proposes will be based upon the principle of a negotiated two-state solution… and to clearly express your opposition to unilateral measures outside of this framework, including annexation by Israel of any territory in the West Bank.”

Any areas Israel would annex would remain Israeli under any conceivable two state solution – which means that such an annexation would not jeopardize a two-state solution.

And every day the Palestinian Arabs, with European help, take unilateral measures to grab land in the disputed areas of Area C. They are explicitly trying to sever Maale Adumim from Jerusalem by building illegal villages there, with EU flags prominently displayed and schools ready for photo-ops if and when Israel demolishes them.

Have any of these Jewish groups ever condemned these unilateral moves against a negotiated solution? How come only Israel has to freeze building in areas it intends to keep, but not Palestinians?

“Annexation of the West Bank, whether in whole or in part, could destroy any chance of a negotiated two-state solution between the parties. We believe that it will lead to greater conflict between Israelis and Palestinians, severely undermine, if not entirely eradicate, the successful security coordination between the State of Israel and the Palestinian Authority, and galvanize efforts such as the Boycott, Divestment, and Sanctions movement that are intended to isolate and delegitimize Israel.”

These same people asserted that Trump’s recognition of Jerusalem would cause an eruption of Arab anger, cause Abbas to cancel security cooperation, and galvanize BDS. Pretty much nothing happened. Saying Israel cannot act in its best interests out of fear of what “experts” say Arabs or Israel haters will do is foolish advice – Israel haters will not change no matter what. The people who signed this letter should know that.

“It will create intense divisions in the United States and make unwavering support for Israel and its security far more difficult to maintain.”

Only if liberal Jews refuse to respect what Israel’s democratically elected government decides to do. This letter and similar statement from liberal Jewish leaders is what causes division among American Jews, not Israeli actions. These groups clearly do not have any idea how to counter anti-Israel propaganda among their own followers, so instead they are surrendering to pressure Israel into doing that the holy New York Times – which appears to be their Bible – wants it to do.

I had a brief Twitter conversation with Michael Koplow, head of the Israel Policy Forum, over his support of the letter.

EoZ: I thought the demographic problem with annexation was controlling a huge Arab population. If Israel only annexes areas that are predominantly Jewish then the democracy problem goes away, no?

MK: The problem is the assumption that Israel can only annex Jewish areas without eventually having to take control of the whole thing. Area C is 60% of the West Bank – you confident the PA will survive or stick around to take care of the rest?

EoZ: I would bet that any annexation would only be the blocs that would become Israeli in any conceivable peace plan anyway.

MK: I’m sure it will start that way but it’s unlikely to end there

EoZ: Making assumptions about what will inevitably happen if Israel does  X has a very, very poor track record.

MK: It’s not about assumptions. Most proponents of annexation have stated that the plan is blocs first, then Area C.

MK: I agree entirely on that point.

I was too polite to point out that Koplow had testified to Congress with doomsday predictions about massive riots in the Arab world if the US moves its embassy to Jerusalem. He was wrong then and the same predictions are likely to be wrong now.

The real question is whether Israel has anything to gain by annexing the settlement blocs.

The answer is that it stands to gain exactly what it gains from asserting Israeli control over Jerusalem and the Golan: recognizing facts. Israel is never going to give up the settlement blocs, so why not formalize the obvious? It is counterproductive to allow the Palestinian leaders – and the EU- to believe that the 1967 lines will be the boundaries of a two state solution. As mentioned, Palestinians are creating facts on the ground and have somehow convinced the world that the entire area east of the Green Line is legally theirs, rather than disputed, which all of Area C certainly is. (Oslo has taken Area A out of dispute, and Area B is a grey area.)

Israel can disrupt this false thinking by annexing at least the settlement blocs and having the US recognize it.

Real peace cannot come about without both sides, and the world, facing facts. Major settlement blocs will never be evacuated. Treating them as negotiable should be as ridiculous to world diplomats as treating Ramallah as negotiable would be today.

The brilliance of Trump’s Middle East moves is that they are recognizing reality in the face of frightened “experts” who assert, invariably incorrectly, how terrible an idea it is to accept the truth. It happened in Jerusalem, it happened in the Golan, it happened with labeling the IRGC as a terrorist group – all of which are simply supporting what everyone knows. Pretending otherwise to bring parties to the table means that the negotiations are based on fiction, and it is difficult to succeed in making a deal if one or both sides are in fantasy land.

A two-state solution is not possible with the PLO as it currently exists. They have spent their entire time since Oslo working not to build a state but to destroy one. But maybe, down the road, a Palestinian leadership that no longer fantasizes about destroying Israel can arise. The only way that scenario is remotely possible is if they accept that Israel is not going anywhere, and the only way that could happen is by Israel asserting its rights in a consistent, unapologetic and unflinching way.

Annexation of areas that are unquestioningly going to be part of Israel is more likely to bring peace than pretending that Gush Etzion is on the table could ever do.

And guess what? When Israel acts with pride rather than pandering to liberal American Jewish leaders who are in turn pandering to the New York Times, American Jews who are actually proud of their Jewishness will support them. If these liberal groups want to help Israel, they need to instill pride in their flocks, both in Judaism and in Zionism. These leaders need to learn how to answer the questions that Israel’s critics hurl at the Jewish state without acting like frightened shtetl Jews. A big reason Israel is losing the support of young American Jews is because their own Jewish role models are too ignorant or cowed to proudly support Israel unequivocally, and to explain why Israel does what it does.